FUJIFILM GFX100S: The new medium format mirrorless packs the GFX100’S 102-megapixel 43.8 x 32.9 BSI CMOS sensor and quad-core X-Processor 4 CPU into a body the size of a DSLR camera. The camera is an ideal choice for commercial and wedding photography, particularly with one of Fujifilm’s excellent prime lenses. While higher priced than the 51-megapixel GFX 50S/R models, the GFX 100S is almost $600 cheaper than the GFX 100, and roughly one third of the price of the Leica S3.
RRP: $9499 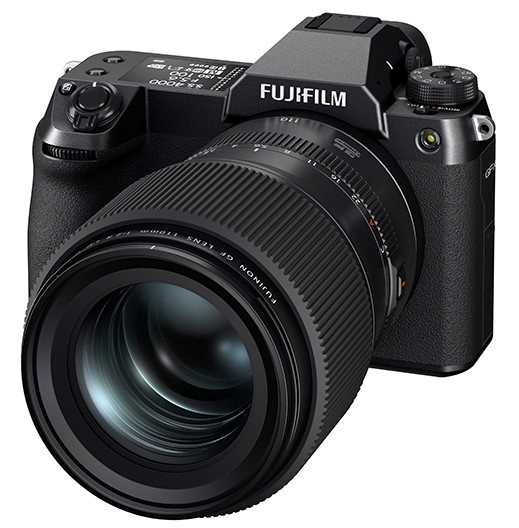 Fujifilm has taken the key features of its GFX 100 camera and fitted them into a smaller, lighter and lower-priced model, the GFX 100S. While the size reduction has meant using a smaller battery, improvements to the IBIS system boost shake correction by half a stop. The newly-refined Sync IS system combines body and lens stabilisation systems in a similar way to the systems in Canon, Olympus and Panasonic cameras. Features like dual SD card slots and extensive weatherproof sealing are fully retained making the new camera suited to hand-held use .

The GFX 100S gains a mode dial at the left hand end of the top panel without losing the GFX 100’s 3.2-inch monochrome data display. Switching between stills and video recording is easier in the new camera, thanks to a slider switch in front of the mode dial, and separate menus are provided for each mode. A new Film Simulation mode, Nostalgic Neg, has been added for users who want to impart a subtle retro effect to shots.

Nothing much has changed on the video front, although the increased speed of the X-Processor 4 enables faster read speeds when recording 4K video, which helps to reduce rolling shutter distortion when filming moving subjects. Despite its smaller battery, the GFX 100S can record movies for approximately 60 minutes with 4K recording, or 65 minutes at FHD resolution.

Fujifilm used to bundle a dedicated version of Capture One raw conversion software with its higher-specced cameras, but you now have to buy it from Phase One. Fortunately, RAF.RAW files from the GFX 100S can be processed in the latest updates for Adobe Photoshop and Lightroom.

Performance-wise the review camera was impressive, with its huge files containing abundant detail and nice tonal transitions. Autofocusing was quick and accurate for both stills and movies, even in very low light levels as long as the correct settings were used. Video clips shot with the review camera were at least as good as those we obtained from the GFX 100 – and in some cases better. Best of all, the review camera was as easy to carry and use hand-held as a typical pro or enthusiast level ILC.

1. The GFX 100S is a 102-megapixel medium format camera that is much the same size and an enthusiast level DSLR or mirrorless camera, and the most affordable model in its class. 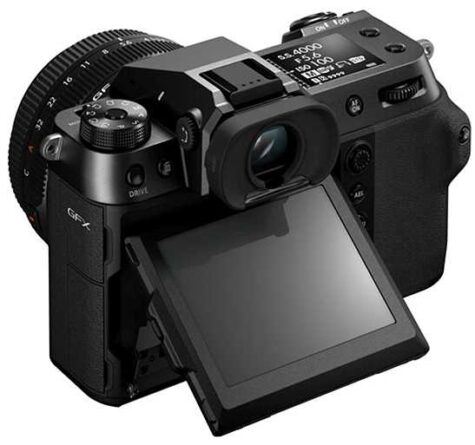 4. The five-axis image stabilisation (IBIS) system from the GFX 100 has been upgraded to provide up to 6 stops of shake correction, despite being reduced in size to fit the smaller camera body. It works with all lenses. Digital IS (which crops the frame) is available in movie mode, as is IS MODE BURST.

5. Refinements to the multi-directional focus joystick make it easier to use and less vulnerable to accidental readjustments.

6. A new Film Simulation mode, Nostalgic Neg., has been added to the regular array of colour/tonal adjustments that can be used for stills and movie shooting. Reminiscent of 1970s American New Colour photography, the new mode adds an amber cast to highlights and boosts saturation in shadows for a subtle retro effect.

7. A new Movie/Still switch just in front of the mode dial allows quick switching between the two capture modes. Separate menus are provided for each mode so users can customise them differently.

8. The GFX 100S supports lossy, lossless or uncompressed Raw in 16-bit or 14-bit colour depth, and provides TIFF file support at 8- or 16-bit depth. A multi-shot mode capable of recording 400-megapixel images is available for use when shooting static subjects.

9. Continuous shooting is supported with two frame rates: the high-speed rate supporting up to 5 fps and the lower rate at 2 fps. Up to 42 JPEG frames, 16 compressed RAF.RAW frames, 15 lossless compressed RAW or 14 uncompressed RAW files can be held in the buffer memory.

10. The smaller body of the GFX 100S uses the NP-W235 rechargeable Li-ion battery, the same battery as used in the X-T4. It is CIPA rated for approximately 460 shots/charge or around 60 minutes for movie recording. The battery is charged via the USB-C port using a supplied cable and AC adapter. Unlike the GFX100, the GFX100S can’t accept a vertical battery grip.

For an expanded review, including benchtest charts, click here.