Brisbane-based CameraPro is expanding its business beyond the traditional retail offering with a revamped outlet in Newstead that features a ‘touch and try’ camera station and a café-style collaborative workspace.

Camera Pro worked to a tight schedule, with the store still being prepared for the grand opening last Thursday afternoon.

The other CameraPro store is in the heart of Brisbane’s CBD, at Level 1, 180 Queen Street.

CameraPro had been in the 232 Arthur Street Newstead premises for around a year, with a dividing wall reducing floor space by about 50 percent and the rest used for storage and warehousing. The intention was always to ‘create a store which makes customers feel comfortable’, CameraPro marketing manager Ryan Lind told PhotoCounter. The new store boast a generous 135 square metres of floor space.

A distinct pattern seems to be developing in Australian photo retailing, with relative newcomers Digital Camera Warehouse, DigiDirect and now CameraPro all growing and opening new premises over the past 12 months or so (in some cases acquiring failed photo retailing premises), while some of the older, more iconic names such as Gerry Gibbs and Paxtons have for various reasons shut up shop.

It’s worth noting that all three of the new breed of retailers established themselves as predominantly online retailers before consolidating their businesses with bricks and mortar outlets.

Ryan Lind said that the young team of staff working at CameraPro were all ‘digital natives’ which enabled a better rapport with a younger generation customers. He also said CamerPro’s focus was all about its customers, whereas he felt some retailers were perhaps divided between focussing on their customers, and supplier relationships.

And who are Camera Pro’s customers? Ryan said that the business was positioned to be ‘the professionals’ choice’, and that positioning also appealed to enthusiasts. So not so much the general public. 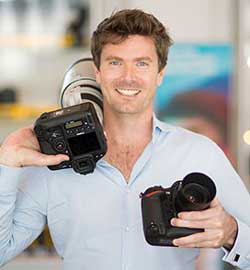 ‘The new store will be so much more than just a camera shop,’ he said. ‘We’re hoping to create a hot spot for members of Brisbane’s photography community to work, either individually or collaboratively.’

So far the store is hardware focussed, with no firm plans at this stage to introduce printing services.

Beyond the collaborative workspace provided in the store, Jesse believes CameraPro Newstead’s real point of difference is the ‘touch and try’ camera station, which will provide photographers of all levels the reassurance they need when investing in their new camera, via a professional lighting and a pop-up photography studio to trial the products on offer.

‘We want our customers to choose the right camera,’ Jesse said. ‘They need to feel comfortable with the entire device, whether it’s the weight, interface or just the location of the buttons.

“To make this possible we have designed the store to be as photographically pleasing as possible to ensure any test shots they take truly reflect the ability of their new device.’

The opening event was held Friday and Saturday (December 10), with support from Olympus, which had one of only two OMD E-M1s in the country on hand for customer trial.

The two-day launch event included workshops and presentations by pro photographers. as well as an array of in-store entertainment, food trucks and live lizards and snakes for a reptiles and wildlife photography workshop.