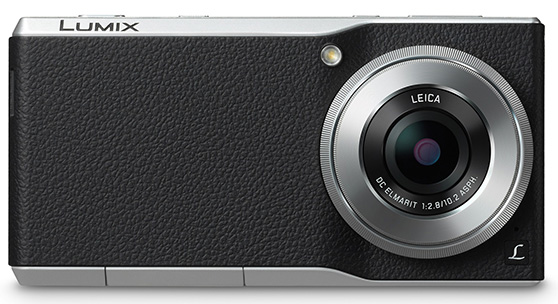 The CM1 can record high resolution 4K video, as well as still images captured with the camera’s 4K Photo modes. These include the same 4K Pre-Burst and 4K Photo settings as found on the latest G-series cameras.

And you can make phone calls to boot! Smart-phone functionality is driven by a  Qualcomm 2.3 GHz quad-core processor and the latest Android 5.0 (Lollipop) OS. A dedicated shutter button is provided as well as a slider for instant switching between camera and smartphone.

The Leica DC Elmarit lens has a 28mm equivalent focal length and maximum aperture of f2.8. The 4.7-inch, 6220K-dot, full HD-display is used for shot composition and playing back images, and the CM1 offers a range of photographers’ screen displays including an integrated digital spirit level, a histogram and fast access to the main settings.

The CM1 has a dedicated imaging processor, ensuring fast response times for picture-taking. The 16GB internal memory can be expanded to up to 128GB with an optional Micro SDXC card. A fast internet connection is assured via LTE (Long Term Evolution) capability. The CM1 also provides standard wireless connections via  Bluetooth, WiFi and NFC.

The Panasonic Lumix DMC-CM1 will be available from selected retailers – including some camera stores – mid July, at an RRP of AU$1399.