Panasonic used Photokina as the platform to announce the Lumix CM1, a new ‘smart camera’ which can make phone calls, and sports a 1-inch (12.8 x 9.6mm) MOS sensor. 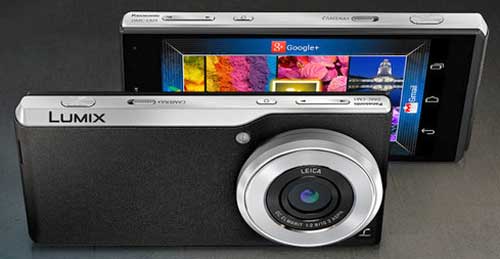 Photokina 2014 has (so far) has seen numerous announcements of this years iteration of existing technology. Canon’s 7D Mark II, G7 X and SX60 HS are perfect examples of this conservative trend. The Panasonic CM1 is something different – perhaps the missing technological link between photography and, for want of a more elegant word, connectivity.

Panasonic describes the CM1 as ‘a camera with Android rather than a smartphone with a camera’. By comparison its nearest competitor, the latest Samsung Galaxy Camera, offers neither mobile phone calls nor the quality of images that a 20-megapixel, 1-inch sensor (as in the Sony RX100!) combined with a f2.8 Leica DC Elmarit 28mm lens, promises to deliver.

The CM1’s shutter release button (it has a mechanical shutter) is located in a natural shooting position and the device includes a slider or direct switching between camera and phone applications. Image and movie options include a RAW format for still photos, and both Full HD and 4K video recording. ISO range runs from ISO 200-12,800.

There is also the obligatory front-facing camera (1.1-megapixels) for those all-important selfies.

Screen display options include a digital spirit level, a histogram and a Quick menu that provides quick access to the main camera settings. Shooting modes include an iA (Intelligent Auto) function. The CM1 also provides a variety of manual controls, including adjustments to shutter speed, aperture, ISO, white balance, exposure and focus settings, which are operated by the rotatable lens ring. 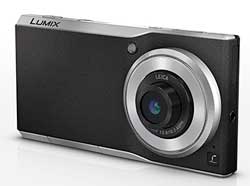 As a phone, the CM1 features a powerful 2.3 GHz quad-core processor, and runs the latest version of Android KitKat (4.4). The internal memory has 16GB capacity for storing apps and image files and this can be expanded to 128GB with a microSD memory card. It comes with integrated fast 4G LTE and includes standard wireless connections such as Bluetooth, WiFi and NFC for sharing and storing images via the already installed Google Drive.

Two negatives about the CM1 is that it will initially be restricted to European markets,  and the price – upwards of $1000.