Sony’s curved sensor technology comes a little closer to reality with the lodging of a new patent on March 19 for what could be the first full frame camera with a curved sensor.

The patent describes a full-frame image sensor that would allow future lenses to be more compact in size without sacrificing quality.

Sony halves share in Olympus
…And talking of Sony, it’s selling half its stake in Olympus Imaging to investment bank JP Morgan to free up cash for ‘strategic investments.’ (See above?).

Sony bought a 10 percent stake in Olympus Imaging in 2012. It was apparently interested in gaining access to the global medical market for its sensor, 3D and display technologies. The two companies created a separate medical joint-venture to apply Sony’s technologies to products based around Olympus’s success in the endoscope market.

Sony will receive US$390m from JP Morgan for 17.2m shares in Olympus, walking away with a more-than- tidy profit and remaining a 5 percent owner of Olympus. 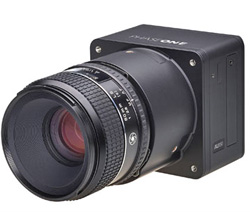 The Phase One iXU 180 features an 80-megapixel CCD sensor, but its body is barely wider than the lens barrel. And weighing in at less than 950 grams, its lighter than some DSLRs.

Phase One says its light weight and design makes it compatible with ultralight planes or gyro copters. Some websites have interpreted this as being drone-compatible, but with a body-only price of around US$50K, you would want the best droine pilot available.

The camera will start shipping mid-April.