With its long-standing alliance with premium lensmaker Zeiss, plus in-house sensor manufacturing with massive economies of scale and an intrinsic technological head start (manifested by a string of highly-lauded premium camera releases), Sony must surely be staring into the whites of the eyes of Canon and Nikon as they turn to see just how fast the contender is gaining on them.

Sony is already disrupting the comfy, decades-old Canikon duopoly, and unless it stumbles badly in the meantime, it’s hard to see market leadership in the same order within the next, what, three to five years?

While incumbency is a huge advantage, both the Big Two have wicked weaknesses. Nikon’s is that it is a customer of Sony, as well as a competitor; its well-reviewed high-res full-frame DSLR stable all rely on Sony for one of their most lauded features – superior sensor performance.

Canon also sources sensors from the world’s largest manufacturer, but has struck out to independently develop its own high-end sensors. It has been dogged by perceptions they don’t perform as well as their competitors’ – with dynamic range regularly cited as a particular weakness. DxOMark places the new EOS 5DSR and 5DS, with their 50-megapixel Canon-developed sensors – the highest pixel count available so far in 35mm format cameras – as just outside its Top 20. And yet they are the highest-rated Canon cameras to date!

Sure, there’s more to a great camera than a great sensor, but it’s a pretty essential prerequisite…

Canon’s gradual abandoning of the responsibilities which come with market leadership, and a corporate hubris which seems difficult for consistently successful operations to shake off (remember Eastman Kodak?), point to a deeper malaise.

Then there’s the advantages the mirrorless interchangeable format possesses versus legacy DSLR technology. The new Canon 5DS weighs 845g body only, while the new Sony is 600g, and you can shave about 2cm off height, weight and depth. With huge improvements in the speed and image quality of EVFs, reflex mirrors are fast becoming the carburettors of camera technology. Or the film of photographic imaging technology. (Remember Eastman Kodak?)

The investment professionals and well-heeled enthusiasts have in Nikon- and Canon-mount lenses provides some protection from the new kid on the block, but Canon must be feeling a tad uncomfortable to see Sony openly demonstrating its new A7R II full frame mirrorless interchangeable with Canon EF lenses and a Metabones adaptor. (Sony Australia has even been bundling Metabones adaptors with purchase of one of its Alpha range!)

‘It’s been refreshing for people to have another option,’ Sony digital camera product specialist Sean Ellwood told PhotoCounter this week. ‘I think that has been helped as well by the fact you can get really effective AF with this camera [the A7R Mk II] with certain third party lenses.’ 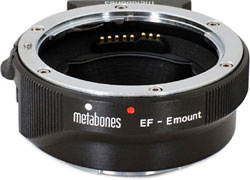 He said a limitation with Canon lenses on Sony Alpha bodies was that the combination only delivered three-axis image stabilisation – pitch and yaw and rotational stabilisation.

‘For X and Y stabilisation we need to know focus position, and we can’t extract that from anything except for native lenses.

‘This was never a feature we designed towards – it’s sort of a happy coincidence,’ he added. ‘We designed it to work well with our old A-mount lenses, and it just happened that because the Metabones adaptor taps into that information, it also made it work well with Canon glass.’

He added that there are a few key EF lenses that don’t work with the Sony/Metabones combination, notably the 50mm and 85mm f1.4; and lenses without an internal motor.

Not only but also
The latest Sony camera announcements are a one-two punch in the the segments of the camera market showing slight growth – mirrorless interchangeables and premium compacts.

The A7R II is the world’s first camera with a back-illuminated full-frame 42-megapixel CMOS sensor. It has in-camera 5-axis image stabilisation, internal full-frame 4K video recording (another first), and claims a sensitivity range of up to ISO 102,400.

AF is via a 399-point on-sensor phase detection system, covering a big chunk of the sensor surface.

The two RX-series Cyber-shots, the sleek, compact RX100 IV and the bulkier RX10 II, sporting a 24-200mm f2.8 Zeiss lens, are based on another world-first sensor, a 1-inch ‘stacked’ Exmor RS CMOS sensor that allows for a shutter with a blistering maximum speed of 1/32,000 second, as well as 4K video capture and superior super-slow motion performance – up to 1000fps at just under 720p! 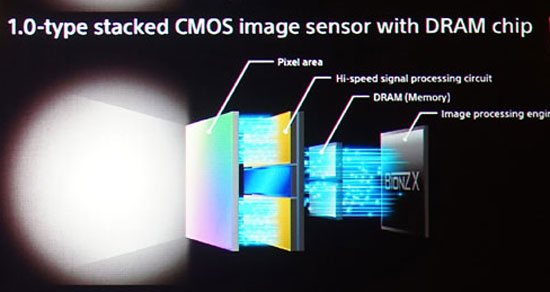 Sean Ellwood, along with Sony’s ‘Alpha Ambassador’ and senior photography lecturer at RMIT, Mark Galer, are currently on a trainee roadshow covering Melbourne, Sydney, Queensland and Perth. They are offering dedicated training for photo specialists, providing them with in-depth product knowledge, tips and hands-on experience of the A7R MkII, as well as the RX100 MkIV and RX10 Mk II.

Actions speaking louder than fine words about ‘retail partnerships’, this in itself indicates an acknowledgement that the specialist channel is now important to Sony. There were no Good Guys stores on the tour schedule.

Another recent initiative has been to help specialist retailers help Sony by displaying a full array of lenses.

‘In stores like DigiDirect and Michaels, where previously they would have a limited lens range, they pretty much have our entire range on show now. We want people to walk into a store and see that. Unless we show it [the breadth of the lens range] how would people know?’

While Sean was coy on the details, it seems that Sony is assisting stores to stock a broader range of Sony glass. (There are currently 14 lenses and two adaptors in the range, with another four due next year.)

He added that Michaels has Sony lenses available for hire, so potential buyers can try before they buy.

‘Other than that, knowledge is vital and we try to keep open channels of communication especially with camera specialty stores, so if they have a tricky question from a customer it’s easy for people to get information they need to make a buying decision.’

We met up with Sean in Elizabeth Street in Melbourne, where he had just concluded a session with staff at DigiDirect. Sony sensor technology was first item on the agenda.

‘Sony has a huge investment in our sensor business so obviously that drives, and is driven by, the camera division.

‘Because we have a close working relationship with the sensor division we are able to develop a camera like the A7R II.

‘Exmor technology in and of itself is to my understanding unique to Sony. Because we are the only company that has that, it gives us a huge advantage in things like noise levels. It gives us a very clean signal that nobody else can really touch.

‘…We are in an enviable position,’ he said.

Going Pro
What Sony doesn’t have as yet in Australia  is a professional support program like Canon’s and Nikon’s. It’s coming.

‘The Sony Alpha product range has grown substantially over the past year with an increasing number of professionals making the move to Sony interchangeable lens cameras, both locally and internationally,’ Vivek Handoo, head of Digital Imaging, Sony ANZ, told PhotoCounter in a written response.

‘We are currently working on building a support service in Australia to cater to their needs and will provide more details once a local offering is finalised.’

Sean elaborated: ‘We have seen the US, and Japan as well now, have a professional service program, and it’s something we want to do here. But we need to look into the nuts and bolts of it. We don’t want to launch a half-baked program that doesn’t do exactly what professionals want from it. The logistics are pretty involved. ‘

– So for instance is it better to offer professionals loan products when their gear is in for repair, or a rapid in-service turnaround, or a combination of both?

Sony currently uses a third party business for camera servicing. Presumably a decision also have to be made as to whether to bring servicing in-house, or continue with a developed form of the current arrangements.

One thing Sony Australia does have and Sony US is about to abandon is an online store. Interestingly, Sony was the first to go direct in cameras. The US move will not be mirrored in Australia, according to Vivek Handoo: ‘The US announcement regarding Sony closing its online store does not have any impact on the Australian online store which will continue to operate as usual.

‘Online has always been a priority for us as well as supporting traditional retailers. They often complement each other as people tend to do their research online and then visit retail stores for hands-on experience.’

(Ironically, as I checked my Hotmail account while preparing this story, an ad popped up urging me to buy a Sony A7R II from the Sony Australia online store. At least it was at RRP!)