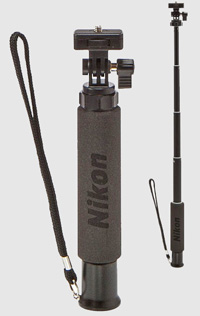 Nikon is the first leading camera company to come out with its own selfie stick, the N-MP001,

It attaches to compatible cameras – including the Coolpix range – via the tripod mount.

As far as your state-of-the-art selfie sticks go, the Nikon version is fairly low-tech. While most smartphone selfie sticks come with wireless shutter release, you have to use the camera’s self-timer or maybe a W-Fi remote control app to take pictures with the trusty N-MP001.

There is no word on local availability but the Nikon selfie stick will sell in the US for US$59.95.

Photo printing needs marcom support!
US Market research firm InfoTrends has made the zany, outside-the-square suggestion that if the photographic industry educated the general public about intrinsic value of hard copy photographic prints, this could drive an increase in photographic printing.

Infotrends says that ‘many of today’s consumers simply don’t see a need to print photos since sharing, viewing, and storage can all be handled digitally with mobile devices,’ but, ‘the market can counteract this trend by educating consumers about the value of printed photos.’

Touching on the twin digital terrors of bit rot and obsolete hardware and software, InfoTrends noted that photographic prints might be ‘easier to access and view as time goes by’.

InfoTrends suggested that education is particularly important among consumers who have no experience with printing photos, like younger people that have grown up using electronic screens and don’t have any nostalgic connection to printed photos.’

It added that its research shows that parents with young children are likely to print photos. Who would have thought?

Unfortunately, that’s where the free insights stop; if you want a copy of the full 29-page ‘ US Consumer Photo Prints Market Forecast: 2013-2019’ it will cost you US$4995. Add another US$1000 if you want the Powerpoint charts as well.

3D scanning from future capture devices?
US researchers have developed an imaging chip that could give cameras and smartphones the ability to take 3D scans of everyday objects.

Engineers at the California Institute of Technology (Caltech) said their device is based on a cheap silicon chip less than 1 millimetre square which can produce 3D scans with extremely fine resolution.

The device works by shining beams of light, which are perfectly aligned, on a targeted object. It then detects subtle differences in the light that is reflected back from that object. The differences help it build a digital 3D image of the target.

It uses an array of tiny LIDAR (light detection and ranging) laser beam scanners. LIDAR elements are used in navigation for driverless cars and robots.

The light that is reflected off the object is picked up by a small 4 x 4 grid of detectors, which act like pixels in that they measure the phase, frequency and intensity of the incoming light and assign a distance value to each pixel in the 3D image of the object that has been scanned.

‘The small size and high quality of this new chip-based imager will result in significant cost reductions, which will enable thousands of new uses for such systems by incorporating them into personal devices such as smartphones,’ Caltech electrical engineering professor Ali Hajimiri said in a release last week.

Previously, shipping to Australia from B&H has been around US$60 – 100, so the price reduction represents a considerable saving. The cut-price shipping is for products weighing up to 12lb and to a value of US$780. It  includes online tracking of orders and a 10 – 15 day delivery time. It excludes lithium batteries, which would restrict low-cost shipping to lenses and other accessories.

However, the new delivery offer doesn’t seem to have been incorporated fully into the B&H product ordering system as yet. Only some of B&H’s range is offered with the lower-cost DHL Global Mail option for shipping.

New Nikon firmware assists video recording
Nikon Australia has announced new firmware for its Nikon D4S, D810 and D750 DSLR cameras, which will provide support for recording command function with HDMI output to external recorders. It will be released ‘later this year’.

The firmware will enable synchronisation of recording start and stop with HDMI output from the cameras. As video recorders will recognise camera operations, recording start and stop commands of the external recorder can be synchronised with the similar commands of the camera. This new firmware will provide greater support for the recording of high-definition, uncompressed data. In addition, it will allow for more efficient video editing.