The long-awaited Polaroid Socialmatic camera/printer/device will be released in Australia in late April/early May, a welcome addition to photo specialist’s retail offerings heading into the challenging winter period. 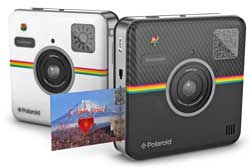 The Socialmatic is a totally new kind of hybrid product. This is how professional photographers’ website, Photo District News described it in its regular ‘Objects of Desire’ feature:
‘Polaroid’s Socialmatic has managed to unite five imaging trends into a single, unique camera. It’s square, like a classic Polaroid print; makes prints instantly, like a classic Polaroid; runs Android and has a rear-facing selfie camera, like a smartphone; and connects to the internet via Wi-Fi, like, well, everything.

‘Then there’s the social element. Each print produced by the camera can display a unique QR code that allows other Socialmatic camera owners (or those using the mobile app) to scan the code and learn more about the image, such as where it was taken.’

Just about the only thing the Socialmatic doesn’t do ‘natively’ is make phone calls.

The Socialmatic sports a 14-megapixel sensor twinned with a generous 4.5-inch touchscreen display. It also has a 2-megapixel rear-facing ‘selfie camera’. It has 4GB of internal storage plus a microSD card slot, LED flash, Bluetooth in addition to Wi-Fi, and GPS. It comes equipped with stereo speakers as well.

‘This will allow us to continue the momentum in truly reviving the Polaroid brand, which is really making a resurgence,’ said Dale Eastman, brand manager for Australian Polaroid distributor, Brands Australia.

‘When people think of instant, they think of Polaroid.’

The Polaroid Socialmatic will retail for $499 in Australia.

A visit to the Polaroid Australia Facebook page confirms that Polaroid is indeed ‘making a resurgence’. With just under 50,000 Likes, and a distinctly youthful and upbeat ambience, there’s definitely something going on here in the niche of instant photography which is perhaps escaping the notice of parts of the mainstream photo retailing community. By comparison, the Tamron Australia Facebook page has under 4000 Likes. 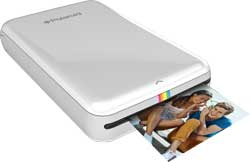 Another new product from Polaroid arriving here at around the same time is the Polaroid Zip mobile printer, which pairs wirelessly to any iOS or Android smartphone or tablet via app to allow users to instantly print 2×3 -inch inch colour photos.

The Zip is about the size of a smartphone and weighs 186g. It has a high-gloss finish complemented by the iconic Polaroid logo.

The only physical control is a power button. It connects to mobile devices via Bluetooth or NFC.

Via an app, users can select and edit an image from their gallery, applying a wide range of creative filters, effects and controls, including sepia, ‘retro’ and HDR. Up to nine images can be collaged on one print.

Users can even create an on-the-spot business card.

Once again, the Polaroid Zip uses Zink ‘Zero Ink’ Printing. The 2X3-inch photo prints in just under a minute. The Zink paper is adhesive-backed the photo can be used as a sticker.