Smoke damage has proved the main culprit, with virtually all stock effected. Initially it was thought that damage amounted to something between between $100,000 and $250,000, and the shop may have been out of action for around a month, but this proved to be over-optimistic.

The fire apparently started in a PC external drive in the rear of the store, and never spread more than a few square metres, but it billowed black smoke through the store for four or five hours.

It destroyed two computers, put a newly-commissioned Noritsu wet lab out of action, and covered the entire store in a thick coating of ash.

Tim was in Launceston working as a photographer on the Targa Tasmania event. His son, Rob Jones, who also works in the business, was alerted by the burglar alarm, rushed to the store and then called the fire brigade. Four trucks arrived in a matter of minutes and had the situation under control shortly after.

‘After fire crews left, the floor was covered in an inch of ash and the windows were black. The store isn’t really burnt out, it’s smoked out,’ explained Tim.

It isn’t the only bit of bad luck Perfect Prints has encountered recently:

‘A couple of weeks before I did a fabulous display for the great new Kodak Photo Place and someone broke the shop window on Easter Sunday, so and I had to pull it all out and do it again.

‘Roll along a week or so, new window installed, fabulous display installed and what happens – back of shop catches on fire, massive black soot everywhere, can’t even see in window, display totally wrecked!

He spent the Sunday cleaning the front display window in anticipation of being up and running in no time. ‘What a ridiculous waste of time that was!’ he reflected. 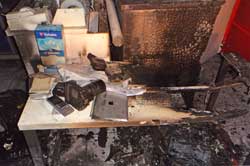 ‘To be frank I thought we would be cleaning everything, maybe throwing a few things out, maybe unwrapping a few frames so the smell wouldn’t be there anymore – but everything’s a compete mess.

‘The stock is always going to have a bit of a smell to it – it goes straight through plastic wrapping, so it’s all disgustingly dirty and smelly.’

Not only was the stock a write-off, but the soot rendered everything electrical unusable. The soot is attracted to metal so it gathered on objects like light fittings – and printer circuit boards.

– And not only magnetic, but conductive, so all light fittings (the store used down lights extensively) have to be thrown away.

‘We can’t clear the stock out until we’ve resolved what’s happening with that. The soot gets into every light so we can’t even turn the lights on. Basically the whole store has to be gutted and all fittings thrown away.’

The silver lining in the saga has been Guild Insurance. (PMA members can insure with Guild at special rates.) Tim also has income insurance to assist financially in the weeks when the store isn’t bringing in any revenue.

‘The insurance company has been fantastic – the assessor John’s a great guy,’ said Tim.

‘We were insured for a fair whack but not enough to re-fit the entire shop – its just such a huge shop – so we’ve looked around and found a smaller shop just up the road.

‘It’s cheaper to start somewhere else, and we don’t have to wait for so long.’

That ‘somewhere else’ is literally a few doors away, at the Trafalgar Centre at 108-110 Collins St. Perfect Prints’ address for around 20 years was 100 Collins St.

The other hero has been Kodak Alaris, with a Kodak technician, Clint Wilson, stripping down the machine, cleaning it as best he could, and re-building it.

While there’s no good time for a setback like this, Tim had obligations to his client Targa Tasmania, and with the Noritsu lab operating (albeit with a few hiccoughs and error messages), Tim and Rob were able to deliver on an obligation to produce 200 enlargements for the annual Targa Tasmania dinner in the midst of the chaos.

The Noritsu is now installed in the new, smaller premises and Tim and Rob expect to be printing next week and opening the doors for full trading in the next couple of weeks.

– And there’s another positive out of the whole sooty mess. Interviewed by local ABC Radio, Tim was able to put in some pretty solid plugs for what photo retailers – particularly those with Kodak kiosks – are able to do these days with images from smartphones – both in store and via a store’s website: ‘There’s a huge business in printing off smartphones…it’s very easy to do these days and people have got thousands of images on their phones that they want printed. More photos are taken than ever.

‘There’s been a hell of a decline in photo processing, but now it’s picking up,’ he told Tasmania. ‘Hopefully it’s a U-curve rather than a J-curve.’