Rumours that Sony would release a new NEX-style camera with the Alpha sub-brand at CP+ have proven accurate, with the model in question being dubbed the Sony a6000. 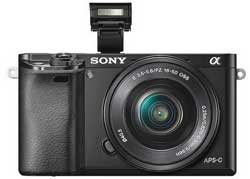 Sony claims the 24-megapixel a6000 has the fastest autofocus in an interchangeable lens camera of just 0.06 sec. Remarkable that such a claim can be made for every shooting situation and with any lens mounted. But then we find the footnote, and the bold claim becomes a little more qualified: The a6000 has the fastest autofocus….‘among interchangeable-lens digital cameras equipped with an APS-C image sensor as of February 12, 2014, based on Sony research. Measured using CIPA internal measurement method with E PZ 16-50mm F3.5-5.6 OSS lens mounted, Pre-AF off and viewfinder in use.’ – So given all these qualifications, it’s probably not a claim which you would want your staff to be making, given the strictures of the Australian Consumer Law! (See separate story).

Click here for Sony’s full press release on the A6000.