Sony has announced the release of an update to its interchangeable A-mount A77 – the A77 II, which will be available in June. 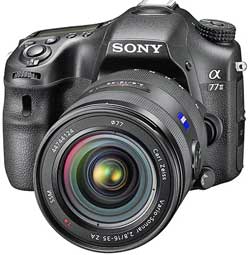 It features a 24-megapixel Exmor CMOS image sensor which Sony says offers 20 percent greater sensitivity than its predecessor. ISO range is from 100 to 25,600.

Sony is talking up the autofocus system in the new model. The company says it has the highest phase-detection AF point count – 79 points with 15 cross points. So there. Translucent Mirror Technology maintains sharp tracking focus on subjects when capturing both still pictures and movie clips, and the new system is less likely to be distracted by other objects and performs well in all types of lighting. The new ‘Expanded Flexible Spot AF’ mode maintains focus even if the selected AF point loses track of the subject, activating eight surrounding AF points that recognise the subject.

Then there’s the ‘Lock-on AF’ mode. which lets users select one of four AF area modes (Wide, Zone, Flexible Spot or Expanded Flexible Spot) and keep tracking as long as the shutter button remains half-pressed. As the subject moves or framing changes, the camera automatically selects the most appropriate AF point from the 79 available. When subject movement is too fast for the new Expanded Flexible Spot mode alone, it’s combined with Lock-on AF for superior tracking performance.

Other new features include an Eye AF function that detects and focuses on the subject’s eyes when photographing people. AF Range Control allows AF to be limited to a specified range, with AF Tracking Duration settings to match the subject’s motion. A Balanced Emphasis mode balances focus and release timing. Users can manually select the most appropriate mode for different situations and creative objectives.

The A77 II can capture a non-stop burst of up to 60 full-resolution JPEG images at a maximum continuous shooting speed of approximately 12 frames per second. It also supports Full HD 60p and 24p movie recording using the AVCHD 2.0 format. On-board Wi-Fi allows one-touch connection for easy shot sharing with Xperia, NFC-compatible Android smartphones, tablets and VAIO laptops. A single touch also activates remote contol, linking the camera to the mobile phone to enable users to fire the shutter from a distance.

Sony highlights the stable of 28 A-mount lenses to match to the new camera. The A77 II will be available in Australia from June 2014 for an RRP of $1499, body only.