March 27: Here from the link on Fujifilm Australia story? See Readers Comments at end of this feature…

A photo store/portrait studio based in a small town in the UK has experienced phenomenal sales growth recently, with the owner attributing the success almost entirely to the use of digital signage to promote its services. 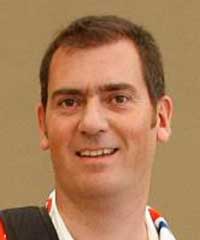 The story of Peter Davies (pictured right) and his Marlborough Photo Services store (Marlborough has a population of 10,000) was reported in a recent DIMAcast interview conducted by industry consultant Bill McCurry.

‘We noticed that the poster signage that we have had traditionally for the last 20 years was just not being noticed by the customers any more,’ said Mr Davies, adding that he could have been offering 10 pound notes on a poster and it wouldn’t have been taken up ‘because people just don’t read static signage any more.’

Instead he has an array of nine small screens which run 24 hours a day advertising the store’s services.

There are actually three sets of three screens which are running off three PCs. One set of screen are in the shop window, another set fits comfortably into the stores frames display area, while the third is nearer the sales counter..

Beyond the photo mug results (which though impressive are not going to save a struggling business by themselves) Peter Davies attributes his best Christmas by far in 20 years of trading – with increased sales in services across the board – to the digital signage, along with (Australian-developed)  Fujfilm Imagine software and a new dry lab.

‘[Fujifilm] does it all for me and remotes in with new content, so I do very little these days,’ said Mr Davies.

Another screen is used to promote the fact that the store can produce work from Facebook accounts, Picassa, Instagram etc. ‘People are beginning to really switch onto social media and realising that we can produce images, products prints and photo gifts from all these different sources.’

Marlborough Photo Services is also disproving the commonly-held belief that younger people will not print photos.

‘We’ve got youngsters coming in for the first time so they can hook up to their and their friend’s Facebook accounts so they can print directly from those.

‘I have to say it’s the digital signage that is the real driving force – 24 hours a day it repeats the message that we want customers to see.’

But how can he be so certain the signage is the ‘driving force’?

‘Because I’m a small businessman I’m often here late at night and I can see people when they come out of the pub, the restaurants…they all stop and look and they all talk about it, because I can hear them through the window.’

The dramatic increase in sales has been achieved at full margins, too, with no discounting at all over the successful Christmas period.

Marlborough Photo Services’ success also challenges the notion that soft display has, or will eventually, see off real photos. That photographs will die out with the Baby Boomer generation.

Could it be that photo retailing has fallen into to a bit of a trough in assuming that the lack of interest in photographs is a permanent change in society, rather than simply a result of a lack of awareness of what can actually be achieved in 2014?

‘We take pictures of our new children, our families, birthdays, Christmases, all of these occasions are going to resonate within a family and to the family members that aren’t able to travel to those events and occasions. It means that they can still get a copy and people still want a copy on the sideboard, they don’t just want to have a soft copy on their phone or in their email or on their iPad,’ concluded Peter Davies. 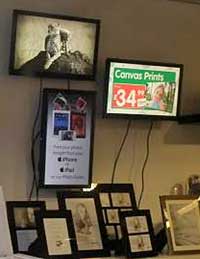 ‘I don’t normally promote DIMAcasts beyond the normal info that PMA puts out, but this is an exception,’ he wrote. ‘I heard about this studio/lab that had an outstanding Christmas season. On a fluke I picked up the phone to call the guy. I caught him between clients and he had a small break in his schedule that day.

‘It was one of the most educational interviews I’ve ever done. Marlborough Photo’s success is brilliant in its simplicity…. Pete’s commitment to do digital display in a unique way paid off in December and its payoff continues to this day. Pete is not shy about doing things a bit differently. Your readers can implement ideas from Pete that will greatly accelerate their sales velocity. This studio is in a small town between London and Bristol.

‘Imagine if an Australian retailer from a larger market adapted Pete’s ideas . . . how many dollars could they gain?’