Apple has announced a new generation of products today, along with yet another ‘powerful new version of its operating system’. 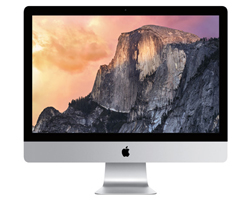 But the one which photographers will covet is the 27-inch ‘iMac with Retina 5K display’ – with a 14.7 megapixel screen!

At this resolution, Apple says ‘text appears sharper than ever, videos are unbelievably lifelike, and you can see new levels of detail in your photos’. The new iMac with Retina 5K display (catchy name) also features the latest quad-core processors, high-performance graphics, Fusion Drive and Thunderbolt 2.

The iMac with Retina 5K display begins shipping today with a 3.5 GHz quad-core Intel Core i5 with Turbo Boost speeds up to 3.9 GHz, AMD Radeon R9 M290X graphics and a 1TB Fusion Drive for an RRP of $2999 inc. GST.

Periscope up!
Here’s something different: Smartphone company HTC has announced the periscope-like HTC Re camera. 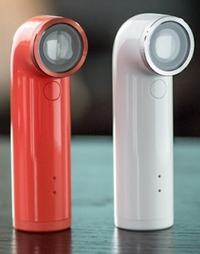 In the kind of modest and understated comment characteristic of your contemporary company spokesperson (Apple has a lot to answer for) HTC CEO Mike Chou said: ‘HTC has been setting the standard for smartphones for years – today we’re focused on redefining the concept of imaging forever.’

The HTC Re It features a 1/2.3-inch (standard digital compact size) 16-megapixel CMOS sensor and an f2.8 lens with an angle of view of 146°. It has no viewfinder, LCD screen or physical controls except for a shutter release.

It takes still photos with a single tap and (Full HD) videos with a longer press. It can record in slow-motion and time-lapse and is even moderately waterproof.

Launches in the US this month for US$200. Will we see it here? Could be a hard sell for your average phone store – HTC’s main channel in the Australian market. (‘What! It doesn’t even connect to the web or make calls?’)

Dick Smith does well
(See how I refrained from a ‘Dick’ pun in that sub-head!?) When private equity firm Achorage Capital Partners picked up Dick Smith from Woolworths for about 10 bucks in late 2012, some pundits anticipated a disaster.

Woolworths management is so clever – why would they flog off the electronics chain so cheap? Uncomfortable with having more than one competitor? Or was there something very wrong with DSE…

But the car crash hasn’t happened. Although shares are a few cents under the float price of $2.20 (this is isn’t a good week to be checking the pulse of the ASX) under ex-Myers executive Nick Abboud, Dick Smith has travelled quite well. This week is reported sales growth of 10.1 percent or the first 15 weeks of the new financial year, and 1.7 percent between July 1 and October 12, with total sales reaching above 10%.

Dick Smith was one of the first CE retailers quick to shrink it’s compact camera range when the bottom fell out of that particular market.

Drone on
Those pesky drones just can’t keep out of trouble. 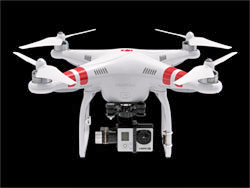 California has now made it illegal to invade someone privacy by taking photos of them with a camera drone.

Anyone found using a camera drone to take pictures of somebody ‘under circumstances in which [they] had a reasonable expectation of privacy’, and where you would have to have been trespassing sans drone to get the same shot will face civil fine of ‘not less than $5000 and not more than $50,000’ as well as a range of punitive and general damages. And if you are a paparazzo, triple the number you first thought of.

And last month a camera-equipped drone was reportedly shot down in a suspected privacy dispute between neighbours in New Jersey.

And a Euro 2016 football qualifier between Serbia and Albania was abandoned after a drone was reported to have carried a flag and a political message, sparking trouble.

Now, according to a leading photography rights lawyer, there’s talk in the UK of another anti-drone law if privacy becomes a major issue (which it most certainly will).

London-based lawyer Charles Swan told Amateur Photographer: ‘Whether current privacy, harassment, trespass and other laws in the UK are adequate to deal with disputes involving drones remains to be seen, as and when the use of drones becomes more widespread in the UK.

‘If it becomes a major issue, there may need to be specific legislation.’

Amateur Photographer also reported that one of their readers witnessed an incident at a car rally in Brighton, East Sussex when a drone apparently crashed onto spectators, causing injuries.

Our sister website ProCounter covered the local legal position regarding drones some months ago. Seems we are ahead of the pack when it comes to regulating the damned things.