Samsung has nothing to lose by bagging camera formats it doesn’t manufacture, so it makes a kind of perverted sense for the company to embark on a Ditch The DSLR campaign.

Old school marketers used to regard comparative advertising (‘my product is great and yours is rubbish’) as a slippery path to head down but now, it seems anything goes. The Ditch The DSLR campaign Samsung US is running claims that the new NX30 mirrorless model is ‘a step ahead of DSLR’ and ‘the Samsung NX Series cameras outperform DSLR in virtually every category’. It then names names in the fine print: ‘Based on results from models in the same price range: Nikon D5200, Canon EOS-100D, Canon EOS-700D.’

The latest wheeze in the campaign is to ‘give away’ NX30s in exchange for handing in a DSLR. But only between the hours of 12-6pm on June 4 if you show up at Times Square New York, and ‘while supplies last’. Samsung says it has a ‘sizeable amount’ of NX30s to give away. It looks like the campaign has garnered plenty of slightly breathless coverage on tech websites and the like, so some pony tail will most probably pick up an award for breaking new ground in social networking for what is basically an old fashioned publicity stunt.

Wonder how long it will be before Samsung in Australia engages with its target demographic on a range of social platforms by running its own Ditch the DSLR campaign? 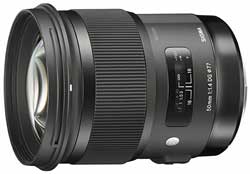 The Sigma 50mm F1.4 DG HSM, which DPReview rated ‘the best autofocus 50mm prime we’ve reviewed to date, with optics so good that we can’t really find anything to criticise’, is now available for pre-order from CameraPro (possibly among others) for $949.

Sigma is really shaking things up in the accessory lens business with its Art Series 35mm f1.4, 18-35mm f1.8, and now the new 50mm prime all garnering rave reviews and making the price of the Canon, Nikon and Zeiss equivalents look decidedly steep.

Back to that DPReview, um, review. There were some odd (and oddly-re-emphasised) grumbles about the weight and size of the lens – and even the cost, for goodness sake. But fast primes from Nikon and Canon cost way more. Could it be something to do with DPReview being owned by Amazon, and Amazon being one of Canon and Nikon’s major customers? Did I hear someone say ‘rebates’?

A optically near-faultless lens is going to come with a lot of high quality glass, which tends to be heavy, and under $1000 seems like a bargain for what’s on offer. The marginally faster Canon EF 50mm F1.2L lens is $2299 from the Canon online store.  The Zeiss Otus f1.4 55mm is over $4000. Am I missing something here?

Monochrom in black and silver
It’s only fitting that a camera which only shoots in black and white only should come in two colours and so ‘responding to popular demand,’ as the spinmeisters have it, Leica has announced that the Leica M Monochrom is now available in silver chrome in addition to Henry Ford’s favourite finish. And for only $10,300 (including RRP).

The silver chrome Leica M Monochrom will be available from authorised Leica dealers.