Olympus has released details of the latest additions to its popular Stylus compact camera line, the Stylus TG-850 Tough model and the Stylus SP-100EE 50x super-zoom model, both scheduled for release in March. 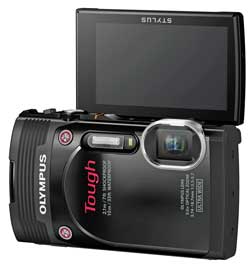 The new Stylus TG-850 Tough is waterproof to 10 metres, shockproof to 2.1 metres, freeze-proof down to -10℃ and crushproof to 100kg. Its 3-inch LCD monitor has a resolution of 460,000 dots and can be tilted through 180 degrees, making it easier for users to capture low angle shots and self portraits. The lens covers a 5x optical zoom range, equivalent to 21-105mm in 35mm format. A new prism with a high refractive index, as well as Super HR lenses were used in the lens to make the camera more compact than previous models. The TG-850 Tough has an RRP of $399.

The Stylus SP-100EE – the ‘EE’ stands for ‘Eagle’s Eye’ – is equipped with a 50x zoom lens (24mm to 1200mm at 35mm equivalent) . It’s the first super-zoom camera with a dot sight to make it easy to frame distant subjects without losing them.  A built-in Super Resolution Zoom enables users to double the focal length range and achieve a maximum of 100x which extends the super telephoto range to 2400mm (equivalent). At such extreme magnification, it can be difficult to find the subject on the rear monitor or in the viewfinder. The dot sight fulfils the role of ‘zoom framing assist’, making it easier to capture distant subjects. 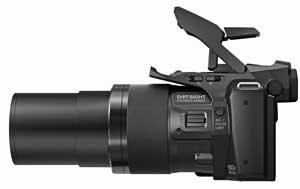 The SP-100EE boasts a 920,000 dot EVF with a specially designed eyepiece that makes it easy to concentrate on framing shots. It also features the same AF system as found in the OM-D cameras and provides a quick start-up time after the power is turned on, speedy auto focus and a short shutter time lag. Other features include a built-in flash, handheld night mode and interval shooting, along with compatibility with the optional remote cable. The SP-100EE has an RRP of $449.

Both models have 16 megapixel backlit CMOS sensors, coupled to the same TruePic VII image processor as found in the flagship OM-D E-M1 model. Top ISO setting of 6400. Both models come with seven Art Filters that can be used when shooting stills and also Full HD movies. They also support progressive movie recording at up to 60 frames/second and include a new Hybrid 5-axis movie image stabilisation that can counteract blurring produced when shooting movies while walking.