Olympus has released details of three new cameras that will update existing models when they go on sale in the coming weeks.

In addition, Olympus has also announced a change of brand strategy, introducing the ‘Stylus’ brand to unify its digital compact cameras.

Stylus will replace sub-brands like ‘Traveller’ for ultra-zoom, ‘Smart’ for entry-level and ‘Creator’ for high-end premium models ‘to convey a consistent market message’. The Stylus XZ-2 premium compact model, announced at the same time, will be the first Stylus model in this new line-up.

The three new cameras are two PEN interchangeable lens cameras, the Lite E-PL5 and Mini E-PM2 (pictured above featuring some of the colour options available) and the aforementioned Stylus XZ-2 premium compact camera.

The magnified frame AF mode enables focus points to be selected from an array of more than 800 points for high levels of precision. Up to 14x enlargement is available.

Both cameras are equipped with the Olympus TruePic VI image processor, which also supports an ISO sensitivity range of ISO 200 to ISO 25600. They also support Full HD video recording with advanced Multi-Motion movie stabilisation and both offer continuous shooting at up to eight frames/second for up to 19 high-resolution JPEGs or 15 raw frames. A one-push 4x teleconverter is available for extending zoom coverage in movie mode.

The new cameras can provide wireless connectivity to smart-phones, tablets and computers via an optional FlashAir SD storage/wireless card, which turns the camera into a wireless access point. A new Olympus social media app is available for iOS and Android devices to take advantage of this capability. It allows easy picture transfer to smart-phones and tablets, as well as Facebook and Twitter.

Both models include a new LiveGuide mode to help novice users make adjustments to key camera settings via intuitive touch-sensitive slider controls. The effects of adjustments can be viewed live on the monitor. For more experienced users, camera settings may be easily adjusted through the touch-screen interface of the new Super-Control Panel. Navigational controls and image zoom in picture playback are also touch-enabled.

The built-in Art Filters menu has been expanded to include 12 settings with new Watercolour and Monochrome effects. Users can select Art Filters via the touch screen and apply a range of adjustments (colour, contrast, granularity) to the effects. Art Filter bracketing is also available and users can select from the list of effects when determining which filters will be applied. The camera records a single shot and then reproduces it with the selected effects, saving each as a separate file. All Art Filters are available in movie mode.

The PEN Lite E-PL5 is an update to the E-PL5 and features a higher-resolution (16-megapixel) LiveMOS sensor plus a vari-angle monitor that can be tilted up through 180 degrees for self portraiture. A customisable self-timer enables users to set delay times and capture intervals so the camera can take pictures automatically in party situations.

The camera is bundled with the FL-LM1 clip-on flash (GN10 at ISO 200). Its accessory port can accept a wide variety of optional accessories including external eye-level digital viewfinders VF-2 and VF-3, SEMA-1 external stereo microphone set, and the PP-1 Bluetooth data transfer module.

The monitor features gapless construction which Olympus says produces a clearer image with lower reflections by eliminating the gap between the LCD array and overlying screen. It also provides a wider viewing angle.

The PEN Lite E-PL5 is scheduled for release locally from mid-October. It will be offered in black, silver or white colours in a single-lens kit at an RRP of $799 (US online price US$699) or as a twin-lens kit for $999.

The PEN Mini E-PM2 replaces the E-PM1 and is designed for users who require superior performance with point-and-shoot simplicity. A simplified touch-enabled menu interface makes adjusting camera settings easy and intuitive. This model includes a new touch stripe control that makes it easier to view and select picture mode settings. Its monitor is non-adjustable.

The E-PM2 will be offered in black, red, silver and white and is expected to be available from early-November 2012. It will be sold as a single-lens kit at an RRP of AU$599 or as a twin-lens kit for $799. 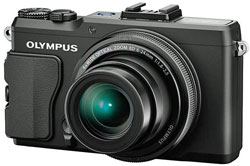 The Stylus XZ-2 replaces the XZ-1 and introduces a slightly smaller but higher-resolution sensor. The 12-megapixel BSI‑CMOS sensor in the new camera measures 7.6 x 5.7 mm, compared with a 10-megapixel, 8.07 x 5.56 mm chip in the XZ-1. The monitor in the new camera is also improved, with a new, tilting 3-inch touch screen that has a resolution of 920,000 dots. The screen can be pointed downwards through 50 degrees or up through 80 degrees for high and low angle photography.

The XZ-2’s non-interchangeable lens i.Zuiko lens is the same as the XZ-1’s. Built from high-quality glass, it includes Extra-Low Dispersion Aspherical (EDA), Dual Super Aspherical (DSA – i.e., two sided aspherical) and Super High Refractive (S-HR) lens elements to deliver clear and detailed pictures. It covers a zoom range equivalent to 28-112mm in 35mm format with maximum apertures from f/2 to f/2.5. A hybrid control ring surrounding the lens can be customised for use as a focus ring, aperture control, shutter speed control and shooting mode selector. A new Control Ring Adjustment Switch turns the control ring’s click detent on and off and also acts as a separate modifier switch.

The Stylus XZ-2 comes with an AP-2 accessory port that can accept VF-2 or VF-3 viewfinders. Its built-in pop-up flash can wirelessly control Olympus flash units such as the FL-600R and 300R strobes. The camera also supports wireless connectivity via the new FlashAir mobile connectivity SD card.

The Olympus XZ-2 is expected to be available from early November 2012. Its recommended retail price is still to be announced.