Canon continues to suffer negative feedback from consumers regarding the disconnect between street prices and the pricing of ‘specials’ on its online retail store. 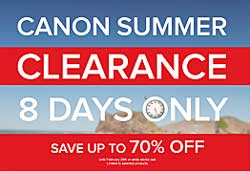 The most recent instance of this was reaction on the Canon Facebook page to a Summer Clearance Sale run in late February. While the general tone of comments from Canon’s Facebook fans is overwhelmingly supportive of Canon’s products and especially its promotional activities, whenever it draws attention to its various online sales (which presumably is one of the prime reasons to create the platform in the first place), it attracts a lot of criticism.

The clearance sale ad boasted savings of up to 70 percent, but disappointed almost everyone who bothered to add a comment in response:  ‘Not much if a discount on any of the decent products. Give us 70 percent off a decent lens why don’t ya?’ asked one Canon Facebook fan.

Others pointed out that Canon’s specials weren’t that special compared to prices offered by Canon’s retail customers – and some retailers who weren’t its customers:

And so it went:
– ‘Listen to your ‘customers’ Canon. You’re WAY overpriced!!!! $4099 sale price for your 5DMK111? DigiDIRECT.com.au has it for $3499 everyday price. Give us a break!!!!!!’
– ‘Dirt Cheap Cameras has it for $3149.00, much cheaper than anywhere else. (Canon didn’t step in here and inform the poster that DCC is not an authorised Canon reseller. Too big a can of worms?)
– ‘Thanks for your response Canon but can still buy all your ‘sale’ items cheaper elsewhere. We love u Canon but give us a proper sale and we might buy some gear.’
To which Canon, bloodied but unbowed, replied:
‘Thanks for your comments. The Clearance specials are genuine discounts off the regular Canon Online Store prices for specific stock items. We also offer free delivery nationwide and bundle-and-save for multiple item purchases. Of course, Authorised Canon retailers also offer their own deals which vary daily.’

There was also some negative feedback on the recent Cashback promotion. The cash never actually went away if purchasing from the Canon store, but getting it back from Canon when purchased from a retailer was prefaced by form-filling and a waiting period.

– ‘Is that where you pay full price then have to fill stuff in, send stuff away and wait?’ To which Canon replied that the savings were worth the wait. ‘Not really,’ the Facebook fan responded. ‘That impressed 10 or so years ago but that’s old, old, old. Point of sale please.’

Another commenter, with more empathy for local retailers than Canon, had this to say:
‘I kind of agree about cashback being old school. If you play your cards right you can get better deals in store.

‘Canon, don’t undercut the shops that deal in your product (as) it’s like shooting yourself in the foot, but instead work with them (especially small business) to get better deals to the ppl that would rather buy in-store so they can get a good feel for the product as well as face-to-face customer service before purchase.

‘You yourself have the biggest mark up when selling direct. Why not give the shops a little more in turn for better deals to the end user. We will buy more products, be less tempted to buy grey market imports (don’t get me started on that issue) and in turn be supporting not only our local small business and enthusiasts but Canon themselves.

– To which most retailers would mutter (so that Canon couldn’t overhear), ‘Well said!’