Canon Australia’s online retailing website collapsed as a result of a spike in traffic created when it announced a 48-Hour Frenzy Sale. It then experienced fierce criticism on its Facebook page from thwarted shoppers due to its sale prices being higher than those available from authorised Canon stockists. 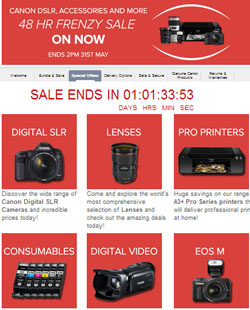 The initial issues with the website are reminiscent of the Click Frenzy crash in November last year when the website for Click Frenzy, the much-hyped Australian equivalent to the US Cyber Monday online sale, failed at the start of the event.

The 48-Hour Frenzy email went out to subscribers on Wednesday afternoon (May 29). Canon has around 200,000 email addresses on its database but it’s not known if the offer went out to all of them. The website became inaccessible almost immediately, and this morning (Thursday May 30) the Canon Store site is slow and still only intermittently accessible. Canon is sharing a direct link via its Facebook and Twitter accounts which takes the potential customer to the front page, but it slows considerably from then on.

‘The response to our 48 hour sale has driven unprecedented traffic to the Canon Store with volumes 15 times normal,’ Jason Mclean, director, Canon Consumer Imaging, Canon Australia, told Photo Counter. ‘While the store has remained online, performance has varied depending on the volume at any given time.’

The site failure is fundamentally a technical issue and the site can presumably be improved to handle the spike in traffic this kind of promotion will engender. In fact, having your online retail store collapse due to an surge in traffic caused by a price promotion could be seen as a ‘nice problem to have’.

Mr Mclean agrees that there are positives to the surge in Canon Store online traffic: ‘We are extremely pleased that the attention that we’ve been driving to local retail value is clearly having an impact with consumers becoming more aware of local store pricing, no doubt also heightened by the recent depreciation of the Aussie dollar,’ he said.

The complaint from subscribers that Canon’s sales prices don’t compete with what’s available from its authorised dealer network is more challenging than a flaky website, and illustrates why suppliers can really only play a cameo role in retailing so long as they maintain a partnership with a retailer network.

‘Canon Store has always been an additional choice option for consumers who want to buy direct from us. The current sale prices are discounted from normal pricing and there is also added value from bundled items such as Canon Care Packs valued up to $299. Consumers can and do assess the value proposition based on their own situation.’

Canon’s dilemma is that if online prices are so low that it cuts into the market share of its retailer customers, it could create a backlash from dealers. Jason McLean has cited ‘switching’ – retailers persuading consumers committed to a Canon purchase to look at other brands – as one of the motives for moving into direct retail in the first place. But preferencing other ‘non-competing’ suppliers would be an understandable response from dealers who decide a key supplier is also a retail price competitor.

But if the prices which Canon offers as ‘sale’ prices aren’t perceived as representing good value by price-conscious consumers, Canon creates bad PR. This underscores Canon’s dilemma – consumers understandably expect ‘warehouse direct’ sale prices to be hot value, not just ‘there or thereabouts’. It would seem that in this episode, Canon has underestimated the price awareness of Canon enthusiasts.

Consumer perceptions aside, some 48-Hour Frenzy prices actually are competitive with what’s available at retail. The $750 price of the Canon EOS M single lens kit was the same on both the Ted’s Camera and Camera House online sites, and also the Canon online site, but with Canon throwing a three-year extended warranty (RRP $99) and free delivery ($10)  into the bundle as added value.

Feedback from Canon fans on its Facebook page in around 12 hours (Facebook and Twitter were inactive for most of today) defines its challenge in presenting itself as a price-competitive retailer while ‘keeping itself nice’ with its retail partners:
– For a major sales event, your ‘sale’ prices are actually above retail prices of most stores in Australia. It’s insulting that you think people that have ‘liked’ the Canon page are that stupid.
– Website too slow, prices too high – even on sale they’re higher than most retailers…
– Con job, this is not a sale at all. I can get everything cheaper at local retail outlets without even asking for a sale or bargain price. Come on Canon you could at least sell items direct at wholesale +10% etc and then just maybe move some of your inventory for end of financial year.
– I was happy when I got the email. I mellowed out while waiting for the site to load at slower speeds than dial up days and I was not disappointed but rather pissed off to see prices far higher than the prices my local camera shop sells (local not grey) Canon cameras for. Really is bad PR to pull such a sale stunt and not even offer prices less than retail Canon. Did anyone research what the retail shops sell local stock at before coming up with this sale idea? When you offer a 5D Mk3 at a lower price than say Leederville Cameras in Perth who I buy from, then please email me again with a real sales pitch.
– EOS 7D prices from Australian Stockists: Photo Continental: $912; JB Hifi: $999; Teds: $1066; Canon Australia 48 hr frenzy sale… EOS 7D BODY* WAS $1898.00 NOW $1479.00. You sale price is some $400 MORE than the most expensive Australian retailer. Perhaps someone from Canon Australia able to explain this? Anyone else want to give it a go?
– Sale? Really? As stated in earlier comments, the price tags are well over and beyond retail prices, let alone grey import price tags. Do you take your consumers for idiots?

Canon can point to its recent print advertising campaign and other initiatives as examples of Canon supporting its retailer network:

‘We remain focussed on growing the local market and bringing attention to Canon locally and we appear to be achieving some success,’ said Mr McLean.

‘In this regard, we look forward to the Vivid Show as another great opportunity to engage with thousands of consumers and create opportunities to buy Canon locally,’ he said.

However, Canon’s 48-Hour Frenzy sales might have done more to support local retailers – albeit in the manner of an unintended consequence – than half a dozen Digital  Playgrounds!