Canon Australia has launched a new business in Australia, in the form of an image storage service called Irista. 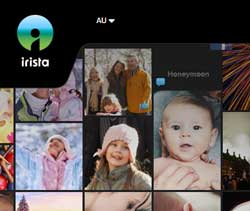 Based on a recent overview published in ProCounter, these rates aren’t particularly attractive when compared to competing services, and while Irista’s upper limit for its standard offer is 100GB, some services offer terabytes of storage at around the same rates. It appears Irista is targetted more at photo enthusiasts than professional photographers.

Irista’s Terms of Use exclude Canon from all liability for loss of or damage to images ‘or any consequential, special or economic loss, including (without limitation) any loss of data, opportunity, profits or anticipated business’.  Images are stored on servers in Singapore and Ireland.

Images (including Raw files) can be searched by date, location, custom user tags, lens type and albums. Social integration with Facebook and Flickr is offered. From January next year Canon plans to offer compatibility with a wide range of popular iOS and Android tablets as well as Adobe Lightroom integration and direct upload from Canon Canon Wi-Fi enabled cameras.

Of more interest to Photo Counter readers will be market research on image storage Canon has released to support the launch of Irista.

The research was based on a survey of 1000 Australians by PureProfile.

Among its finds are that 66 per cent of the respondents who have lost precious memories have done so due to the damage or failure of a ‘physical storage device’, yet as many as 76 per cent of Australians still rely on these devices to preserve their precious memories. (It’s not clear whether ‘physical storage device’ includes photo albums in this research).

Fifty-seven per cent of all Australians claim they do not use internet storage for their images while 51 percent say it’s ‘too confusing’ or ‘too hard to understand’ (24 percent).

Other findings include:
– 58 percent of the respondents say losing images of family events causes the most distress followed by lost travel images (55 percent), and photographs of their children growing up (30 percent);
– Of the people who have lost images, 28 percent were affected by a misplaced external storage device, 23 per cent due to a misplaced photo album and 19 percent lost images due to theft of a camera or computer where the images were stored;
– 66 percent store their images on their camera or mobile phone while 54 percent store images on their computer and 46 percent store them on an external memory card or storage device (hard drive/SD card/USB stick);
– 89 percent rank the images stored on their camera device to be of high value to them, with 1 in 5 people considering these images to be completely priceless;
– Only 37 percent claim to be using online storage of any kind and 6.4 percent have no idea whether they are even using online storage;
– 50 percent admit to holding onto their password for two years or longer.