Apps only a partial answer

Fifty-five percent of smartphone photographers in the US now have experience with ordering photo output products, according to ‘Photo Output Product Survey Among Mobile Photographers’, a study from market researcher Suite 48 Analytics  conducted among 1641 North American mobile photographers. 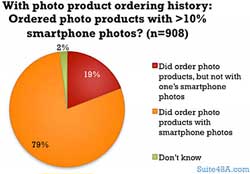 However, the preference so far is to place an order via a computer or access digital files from an online library rather than use a smartphone app.

Of the 55 percent of smartphone-toting respondents with photo ordering experience, 79 percent have also included smartphone photos in their orders.

To some extent, the inclusion of smartphone photos in consumers’ photo product orders reflects the changing demographics of smartphone photographers, according to Hans Hartman, president of Suite 48 Analytics and principal author of the report.

‘We’re past the stage where smartphone photos are mostly taken by teenagers and young adults. Traditional photo product buyers, such as parents, are now using smartphones to capture “print-worthy” moments that would have been missed without smartphones.’

The study also sheds light on how smartphone photographers create and order photo products. As yet, only a few use smartphone or tablet apps for this purpose; most place orders via their computer by using a retailer’s website, the study found, after the consumer accesses their smartphone photos to Facebook, Dropbox or whatever, or transfers them directly onto their computer.

This is no surprise, according to Hartman, as most photo product apps haven’t been around for much more than one year. But consumers’ preference for using computers to order might stem from an emerging trend in which purchasers combine smartphone and digital camera photos into multi-photo output products, such as photobooks, calendars or sets of photo prints.

‘Assuming that smartphone photographers are even aware of photo output product apps at this point, they make pragmatic trade-offs between the immediacy and always-with-them advantages of smartphone apps vs. the familiarity of larger screen alternatives on their computer. If they mix and match smartphone photos with digital camera photos, the computer has another important advantage: it is the place where large collections of high-res camera photos already reside.’

For photo product developers the opportunity lies in leveraging the advantages of both computer and smartphone app methods, for instance by incorporating seamless photo syncing and central cloud storage into their solutions, and enabling photo product purchases to be initiated on one device and completed on another.

‘The potential for photo product market expansion is not only to offer apps that simplify on-the-go photo product ordering – and we have seen a lot of progress made in this area over the past 12 months – but also to make any-device ordering methods for any-device photos super easy,’ according to Hartman.