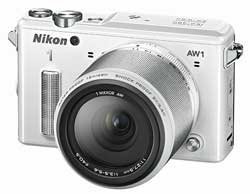 The AW1 has a 14-megapixel, moderately-sized 13.2 mm x 8.8 mm (1-inch type) CMOS image sensor with no optical low-pass filter. Focal length multiplier using this sensor is 2.7x. The hybrid autofocus system uses 73-point phase-detection AF and 135-point contrast-detect AF. It offers continuous shooting speeds of up to 15 fps with AF tracking and the press release further claims high-speed continuous shooting of full-resolution images at 60 fps when focus is locked: This is a bit deceptive given that it can only take 60fps for 1/3 of a second, as burst depth is approximately 20 shots.

The camera shoots NEF-RAW in addition to JPEG. It is waterproof to 15 metres and shockproof.

The new EXPEED 3A image-processing engine is ‘optimised for the camera’ (lucky, that) and supports an ISO range of 160–6400. The built-in flash has a guide number of approximately 5 (metres, ISO 100) and can be used underwater.

A new action control function enables quick and easy switching between menu screens, while a Control lock function that prevents accidental operation when wearing gloves. The AW1 also has built-in electronic compass, altimeter, depth gauge, virtual horizon display and location data functions that can be used to create logs tracking depth or position. An Outdoor display option makes the display easier to read outdoors or wherever ambient lighting is bright.

Three underwater shooting modes are available: Standard, Scuba and Close up. Colours can be viewed and adjusted using the live view display and white balance and auto distortion control are available.  A new Slow View function automatically buffers 20 frames at the moment focus is acquired, and then plays them back in a continuous loop at 5x slow motion while the shutter-release button is held down halfway. When the desired frame is displayed, pressing the shutter-release button the rest of the way down records the current frame to the memory card.

Announced concurrently with the Nikon 1 AW1 are two dedicated waterproof lenses: the 1 Nikkor AW 10mm f2.8 (waterproof to 20m) and 1 Nikkor AW 11-27.5mm f3.5-5.6 (waterproof to 15m) , which have been designed for use exclusively with the Nikon 1 AW1. Both lenses are scheduled for release with the camera in October. In the interests of keeping thinks murky, as usual no pricing is supplied by Nikon Australia. US pricing is US$800 for the single lens kit and US$1000 for the twin lens kit.

An underwater Speedlight for Nikon 1 cameras (SB-N10) is in development and scheduled for release in March 2014.