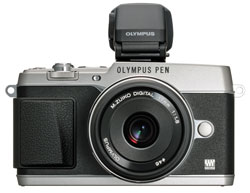 The E-P5 takes the mantle of flagship in the PEN mirrorless interchangeable range. It has, according to Olympus, the ‘world’s fastest shutter speed in its class’ (1/8000 sec) and sophisticated wireless connectivity capabilities. The premium PEN E-P5 compact system camera follows the stylishly classic PEN design

It also has WiFi built in, providing wireless LiveView to a remote device and super-quick touch-shooting capability with iOS and Android devices.

It features the world’s fastest autofocus speed and the world’s most advanced 5-axis image stabiliser built into the camera.

When the E-P5 becomes available in Australia in July, it will be offered as a body-only option (unlike its predecessor, the E-P3) as well as several kits with bundled lenses and the new VF-4 electronic viewfinder. The detachable EVF is available as an optional accessory. It features 2.36-megapixel resolution and 1.48x magnification.

Other accessories include a selection of upmarket hand-stitched leather items – a neck strap, camera case and shoulder bag.

Olympus has also announced availability of black versions of three of the most popular Olympus prime lenses: the 17mm f1.8, 45mm f1.8 and 75mm f1.8 for matching with black bodied E-P5 and OM-D E-M5 cameras.