One of the highlights of The Digital Conference (Melbourne, May 24 – 26) was the closing session on Friday evening, ‘Competing Successfully With Online Stores’.

Chris Wilkinson, managing director of business strategists, First Retail (pictured above right), opened the session with a five-minute statistical overview of the inroads online retailing is making here and overseas.

He said the average Australian spends 22 hours per week online, which beyond any other effects means that there is less time for other activities.

‘What it really means is that there is a lot less time to do things like trips to the stores, and we are seeing that with the High Streets and the malls with lower pedestrian counts. With our shopping patterns changing. Lunchtimes are no longer as busy as they used to be, late night trading is no longer a big factor.’

He said that online sales were $50.2 billion last year; there has been an increase in online purchases of 25 percent from 2010 to 2011; and that the frequency of online shopping is also increasing, with the average Australian online buyer bought 9.7 items in last six months.

Around $6 billion in sales in 2011 went offshore. He said that offshore online sales were a particular challenge for photo retailing and also fashion retailing, another retail category in which First Retail worked.

He emphasised that social media was now an important factor in the retailing equation, with 34 percent of shoppers finding sites via Facebook. ‘It’s the new face of consumer loyalty and engagement,’ he said.

‘The number of Likes that a retailer has, has a direct correlation with their performance online.’

He said that Australian websites have a good reach, but people don’t spend as much time when they visit them as they do European and US sites – where sales revenue as a percentage of overall sales is significantly higher than in Australia and New Zealand.

He said the overseas experience of increasing online sales was an an indicator of where the trends are heading if local website quality is improved.

He summarised his overview by saying: ‘More consumers are using the web (that’s a no-brainer!), the demographic is widening, Australasia still lags behind other regions, sites need to be more engaging.

‘It will continue,’ he said, ‘but we don’t really know at what expense to traditional retail.’

He then threw open discussion to the panel, moderated by Paul Artkins, who put up a question based on Mr Wilkinson’s initial presentation to each of the panellists. 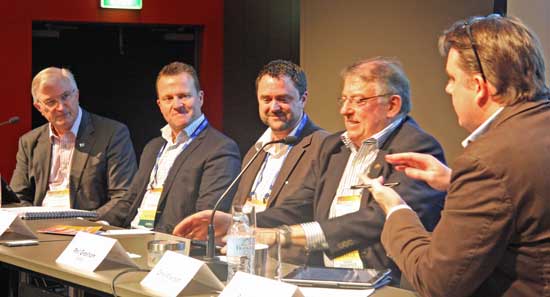 To Nic Peasley he asked: Stores can no longer predict which days are going to be the busiest. How do you manage this?

‘We us technology. Fortunately we have traffic counters in most of our stores which allows us to gauge where the trend is and we try to roster out staff accordingly. We try to make sure the best staff are on at the best times, The busiest times used to be Thursday nights, Friday and Saturdays, but it’s now moving in some stores to different times. It’s evolving all the time but I think the use of technology allows us to know where people are and to put the right staff in the right place at the right time.

To Phil Gresham: You’ve recently moved. Your focus is probably a little bit away from the foot traffic to e-commerce. How have you coped with that?

‘Well, we started an e-commerce business about 14 years ago, in the early days. It was pretty rubbish, and then we let it go for a while and then I actually stole Chris Wilkinson’s site, about 5 years ago.

‘It’s really been as recent as the last 3 1/2 years that with the help of my friend next door (fellow panellist Phil Hugron) we’ve changed to a Dakis site. The thing is, we can now change that site to suit our business, and almost on a daily basis. So if something’s hot we’ve got it online.

‘I think the big thing, though, is that your online presence should match your instore offering as well. They shouldn’t be totally different themes.

To Phil Hugron, Dakis: Are you seeing these trends being discussed here mirrored worldwide?

‘At Dakis we deal with hundreds of independent stores and specialty stores and what we’ve been seeing is that the web for sure is here to stay and will continue to grow to what we call multi-channel retailing. It’s just like in the banking world, where you don’t decide how your customer is going to deal with you – you provide channels so your customers can deal with you the way they want to; when they want and how they want.

He said banks provide tellers behind the counter, ATMs, and telephone and online banking.

So providing a good website allows consumers to deal with you the way they prefer and its there to grow, he said, adding that the web is a great equaliser for smaller operators as for a relatively small monthly spend of ‘just a few hundred bucks delivers almost equal power with the bigger guy.’
.
He said that more and better online retailing sites in Australia and his own homeland Canada, which is experiencing similar bleeding of sales across the border to the US, could bring back sales to local businesses.

‘I think we’ve seen a lot of numbers of people shopping in the US and the UK just because they’ve been more aggressive online, they’ve built up online presence. It’s not because they are doing so it well, it’s because Australians and Canadians are lagging.

‘We really need to catch up because people are shopping elsewhere. More e-commerce websites will bring back the shopping locally. Just because we haven’t been doing a good enough job in Canada – and we are seeing the same thing in Australia – that’s why the Americans are doing so well and the Big Ws and Walmarts are doing so well. Because we, independents, have just given them market. Now there could be a real revolution if all the independents started adding good websites. They would really start feeling the heat!’

‘I was interested that the number was 22 hours (spent) online because that’s the same number of hours that people watch television. And of course they are not mutually exclusive…

‘So the first thing is, I don’t think people are spending their time online – I think they’re doing a whole bunch of other things. There are some co-incident things: People are demanding photo courses like never before…These people are becoming the prosumers. They are becoming much more engaged with photography. At CCP you can’t get in immediately [to do a photographic course] – you have to wait at least one semester. ACP in Sydney is exactly the same. These people are spending a lot of money to go on a seven week course.

‘…A concurrent activity is that you’ve got a simpler life going on – why are people going for organic foods? Why are people going to farmers markets? It’s because they’ve decided about a quality of life that is not processed. And exactly the same thing is happening in retail. People are going back to some speciality stores because of that unique experience.’

– But wait, there’s more! We will present a report of the second part of this session next week. Having identified the scope of the challenge, Chris Wilkinson and the panellists move to a discussion of strategies, solutions and opportunities.