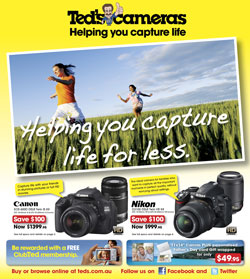 Over 700 members of the advertising, marketing and retail industries gathered at the Docklands in Melbourne on August 10 to recognise the design and effectiveness of one of the most resilient and popular advertising mediums – catalogues.

The awards night highlighted the importance of creativity and design, which underpins the effectiveness of catalogues.

‘Ted’s spent many months developing the “helping you capture life” slogan and it has obviously been well accepted.’

The Ted’s catalogue creative was supplied by advertising agency Wilson Everard while the content was put together by an in-house team at Ted’s Camera Stores head office in South Melbourne, headed up by advertising manager, David Utton.