Sky’s the limit with Canon 60Da

Canon has announced a new EOS digital SLR camera, the Canon EOS 60Da, which is tailored for astrophotography. 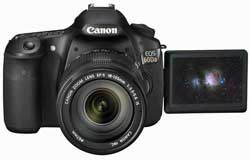 Based on the mid-range EOS 60D, the new version is built around an 18-megapixel APS-C CMOS sensor and DIGIC 4 image processor. It has outstanding low-light, long-exposure shooting performance, in addition to a Low Pass infrared cut filter that allows better capture of hydrogen-alpha light. The filter delivers approximately three times the transmission factor of the Canon EOS 60D and is designed to allow the capture of much clearer images of reddish, diffuse nebulae.

The low-noise characteristics of the CMOS sensor together with its high sensitivity normal ISO 6400 (expandable to H:12800) combine for the long exposures required to capture stars and other astronomical subjects. The 3-inch vari-angle Clear View LCD screen can be positioned at a comfortable angle while seeing exactly what is being captured by the camera. More than 60 Canon EF lenses are available to suit varied shooting requirements and conditions.

Accessories that can be used with the EOS 60Da include the Timer Remote Controller (TC-80N3) allows accurate control of exposures of up to 10 minutes and the automatic shooting of repetitive shots via an interval timer. The EOS 60Da will be bundled with Remote Controller Adapter RA-E3 to allow connection of the Timer Remote Controller. The Remote Switch (RS-80N3) can also be used to prevent camera shake during long exposure shots when using the camera’s bulb setting. Canon’s battery grip (BG-E9) offers improved power supply for long exposure shooting.

The EOS 60Da will be available through Canon dealers from April 19, in a body-only kit.