‘Showrooming’ – a glass half full?

According to a study by the Pew Research Centre, more than half of adult mobile phone owners in the US used their phones while they were in a store during the Christmas holiday season to seek help with purchasing decisions – with most who purchased then opting to do so in the store anyway. 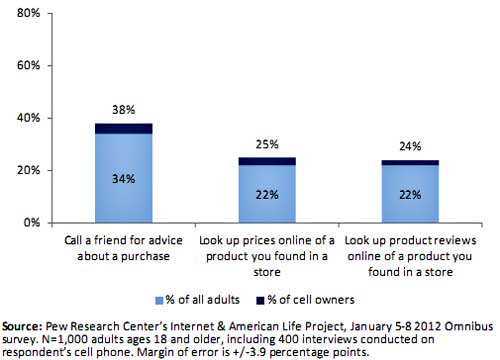 There are a number of demographic patterns in these survey findings. Specifically:
– Mobile owners ages 18-49 are significantly more likely to use their phones for online product reviews than are cell owners aged 50 and older. Cell owners ages 65 and older are especially unlikely to do this;
– Urban and suburban consumers are roughly twice as likely as their country cousins to have recently used their phone to look up online reviews of a product they found in a physical store;
– Those who have attended college are more likely to do so than those who have not. 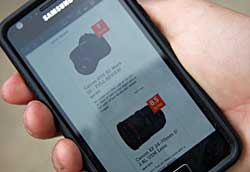 Online price matching and looking up online reviews frequently go hand in hand. Overall, of the 33 percent who used their phone to look up either product reviews or prices online, roughly half (representing 17 percent of mobile hone owners) used their phones to engage in both of these activities.

One in five ‘mobile price matchers’ ultimately made their most recent purchase from an online store, rather than a physical location, but almost twice as many purchased the product in the store where the mobile research took place.

Since one quarter of mobile owners looked up the price of a product using their phone in the 30 days preceding our survey, that works out to 5 percent of all mobile phone owners who purchased a product online last holiday season after looking up its price online from a physical store. An additional 9 percent searched for the price of a product they found in a physical store but ultimately purchased it at that store.

COMMENT: This research tells us that ‘showrooming’ is not the unmitigated disaster it’s been made out to be. It doesn’t have to be a one-way street. Don’t assume the sale is lost if someone in your store whips out their smartphone and jumps onto a price-matching website. Of those who actually go on to make a purchase (and remember, ‘tyre-kickers’ have been with us well before the internet) twice as many will buy in your store as not. Superior retail sales skills may be able to convert ‘showrooming’ consumers into purchasers.