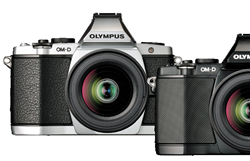 Featuring a 16 megapixel LiveMOS image sensor and integrated 1.44 megapixel electronic viewfinder (EVF) the E-M5 has a weatherproof magnesium-alloy body and is equipped with the world’s first five-axis image stabiliser. The body of the new camera is reminiscent of the early Olympus OM-series film cameras, although a little smaller and lighter. It is offered in either silver or black.

The EVF is located in what was the pentaprism housing of the original camera and the overall handling of the new camera is a cross between the older film style and a recent DSLR.

There’s a shallow (but adequate) grip moulding on the front panel and a large thumb grip on the back. The shutter release button is in the same position as on PEN-series cameras . It’s surrounded by one of two control dials, the second being slightly further back on the top panel. A dedicated movie button is also located here.

The 3-inch OLED monitor on the rear panel has a 3:2 aspect ratio and touch panel overlay plus a resolution of 614,000 dots. It tilts up through roughly 90 degrees and down through about 45 degrees, making it easy to shoot with the camera held above the head or at waist height. The TruePic VI image processor is the same as in the PEN E-P3. Sensitivity ranges from ISO 200 to a maximum of ISO 25,600, with the Auto setting capped at ISO 1600. It’s adjustable in 1/3 or 1EV steps.

The E-M5 comes equipped with Olympus’s multi-shot 3D Photo mode, which enables users to produce MPO files containing stereo pairs of JPEG images. 3D video doesn’t appear to be supported. However, a new Movie Echo function allows users to ‘freeze’ the scene briefly while recording, after which the scene fades away into the next bit of footage. Two modes are provided: One Shot Echo (which freezes a single frame) and Multi Echo (which freezes frames at set intervals.)

Connectivity options are as expected for a DSLR type of camera, with a combined USB/AV port, HDMI and Olympus’s proprietary Accessory Port 2 as well as a socket for the RM-UC1 remote controller. Images are stored on SD, SDHC or SDXC memory cards. The E-M5 is scheduled for local release in April. While Australian pricing has not been supplied, online retailers in the US are taking pre-orders for the new camera at US$999 (body only) and US$1099 with a 14 – 42mm lens. Let’s see how close Olympus Australia can come to parity.

To view a 10-minute video demonstration of the camera’s features, click here.