Lifepics retailers now have a new look to their sites along with an improved user experience for customers, featuring more intuitive navigation. 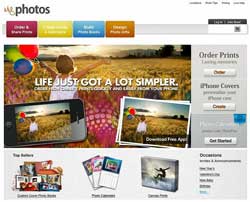 ‘The new look is more up to date and just like a shopfont, people get bored with it over time so a change generally gives a lift,’ said Steuart Meers from Lifepics Australian partner,  Photo Direct

He added that it’s more than just a cosmetic makeover: ‘The new coding allows stores a lot more flexibility to change the look and feel so they don’t all look the same.’

A more intuitive interdface makes it easier foir stores to promote ‘hero products’ or drive a specific category or product.

Mr Meers said that Photo Direct was building numbers in the Lifepics program.

‘We are having a surge at the moment,’ he said. ‘I think it’s driven by word-of-mouth of the success of our current customers talking with others.

‘Also, retail being a little soft at the moment is causing bricks and mortar stores to look for extra revenue opportunities.

He said that as well as increased Lifepic members, the value of transactions was also increasing.

Most popular products other than prints are canvas, photo books and gift cards –  in that order.

Six percent of orders were now coming from smartphones, up from 1 percent.

Mr Meers added that over half of the traffic on Lifepics sites was new visitors as opposed to repeat business.