A professional web presence is as basic as a pleasant in-store environment and good staff, according to photo ordering software specialists LifePics and Dakis.

‘Today no store can survive without a great web presence – it’s a fact. If you are not online, you simply don’t exist any more!’ 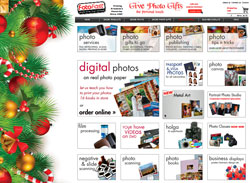 Fotofast Brisbane is often noted as a local independent retailer presenting well both in-store and online.

A great store and an indifferent or no website won’t work any more, but neither will a great web presence with a store in which the basics have been neglected.

‘We see that there is a lot of money to be made in the imaging market when done right,’ said Dakis CEO, Philippe Hugron from the company’s head office in Montreal, Canada. (In Australia and New Zealand, Dakis partners with IPS.)

The store is still the cornerstone for the independent imaging retailers’ operations and drives in most cases 80 percent of their business, he added.

‘Certainly, once your store is operating smoothly and your product offering is well-packaged, the web provides an essential avenue to grow the business.

‘Today no store can survive without a great web presence – it’s a fact. If you are not online, you simply don’t exist any more!’

He said that the most successful retailers have both a strong store and web operation.

‘It’s unfortunate to see too many retailers cutting corners with their web presence or simply underestimating the impact of the web presence on their overall business.

‘A bad and underperforming website has a negative impact on stores’ advertising and marketing initiatives and ultimately on online and in-store sales. To succeed today you need a good web presence to support your store operations.

‘You can’t just launch a site and say the jobs will come.’

‘People need to get back to basics. Step back and look at your store. If you are in retail you should present well. You should have well-trained staff and it should be a pleasant experience to walk into the store.

‘Then look at the market. If you are down on numbers then you’ve got online, you’ve got the social media. But you’ve got to drive them and it is a full-time job.

‘You can’t just launch a site and say the jobs will come.

‘Theres a strong and vibrant industry out there, but some retailers don’t get it, or treat it with disdain – I’m not sure what it is. There’s about half a dozen retailers doing it really well.

‘Of course, I will push the LifePics platform as the best solution, but whatever path you take, if you are not online at all you are just missing the boat.

‘It’s a really vital part of a modern bricks-and-mortar business.’

Underscoring this synergy between the phyisical store and the website is the steady growth of consumer preference for the ‘order online, pick up in store’ option.

‘LifePics find that when independent retailers have pick up in store and ship-to-home options – and you need to have both or you are losing business –  about 70 percent pick up in store.

‘People would rather spend an hour over a week or a month or a year at home  preparing their order and press “click and send” and pick it up tomorrow  or next week – instead of sitting at a kiosk.

‘It’s obvious, and what’s challenging is that a lot of the [online ordering software] industry’s customers actually have the capability to produce all this gear in store already, and are just not opening up all the funnels to bring it in.’

LifePics is currently more focussed on smartphones apps and social networking sites than Dakis, and there’s a slight divergence of approach to this emerging niche: 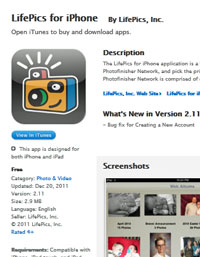 ‘We see too many retailers jump on the mobile and social website widgets bandwagon while not covering the basics properly,’ said Dakis’ Mr Hugron. ‘As an independent photo specialty imagining store, I would first want to make sure that my website brings in $10,000 worth of prints per month and $20,000 worth of imaging products per month before I even start to consider other selling avenues.

‘If you aren’t hitting these numbers, you haven’t covered the basics. There is no use to scatter and run in all directions. Mobile and social apps won’t magically save you. You should rework your website, your marketing and your advertising at this point,’ he said.

He also questions whether independents need to support channels in which they may be overlooked.

“If I’m an independent photo specialty store, I don’t know why I would want to promote these mobile app networks that also promote “big boxes”, supermarkets, mass merchants and their wholesale labs”.

Nonetheless, Dakis has had a Facebook Connect function since March this year and will be releasing a mobile application in 2012 specifically for indepdendents.

‘Our strategy as always is centered around the store and multi-channel retailing so you can expect something that will be a great element supporting independent photo specialty retailers’ branding and privileged consumer-retailer relationship.’

While as noted LifePics is further down the path in terms of developing apps for a variety of smartphones and connecting to social netowrk sites, Steuart Meers was realistic in assessing the current worth of these channels.

‘Would  you do a photo book on your iPhone? Probably not. But it’s relevant and it’s here today. Will you get rich on mobile phone printing? Probably not, but you need to incorporate it as part of the whole business.

‘Online and mobile – neither by themselves will change your life, but would you ignore something growing at 30 percent per year?

He says that around five percent of LifePics orders are now now coming from smartphone apps and there was a strong emphasis in growing this figure with increased ‘retail connectivity.’

‘The future for LifePics is more about driving the network. Looking for hooks wherever there’s an image pool, and making that available to our network of customers.

It was basically a numbers game: You might only get one order if you are tapping into a network of 1000. ‘But if you have access to 10 million, you get yourself a nice steady stream.’

LifePics currently facilitates printing from iPhone, iPad, Android, Windows 7, Facebook and Photobucket, with Flikr and Picasa about to re-launch.

‘It’s more images than we have ever had access to , so it’s more output,’ said Mr Meers.