ARA dreaming of a bright Christmas 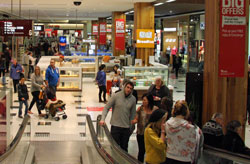 According to the new Christmas sales predictions released by the ARA, shoppers are expected to put about $41.2 billion through retail tills from now until Boxing Day, a 3.9 percent increase on sales during the same period last year ($39.7 billion).

‘While we by no means expect shoppers to be beating down the doors to go Christmas shopping, especially in the early stages, the figures represent growth which will see retailers hear some rings of their tills and gift recipients will certainly find presents under the tree,’ said Russell Zimmerman, ARA executive director.

‘Retailers are holding their collective breath for another interest rate cut in December, as they know this may give consumers the incentive they need to go out and get some of the Christmas shopping done in early December as well as the usual late December rush.’

Zimmerman says categories such as food and hospitality are buoying up the projected figures, whereas categories which rely heavily on Christmas time sales such as apparel and department stores are posting less growth, which is a sign consumers still need relief.

The scenario is less rosy in Tasmania: ‘With predicted sales for Tasmania down 4.2 percent on 2011, retailers in Tasmania will be hoping customers can find spare cash to support their local economy, which is in the process of seeing new growth opportunities for both retail and tourism for future success.

The ARA added that online sales will hit new highs, and retailers should be mindful of the quality of their websites.

‘A lot of online access will include researching products, comparing prices and finding out where retailers are. It’s important retail businesses update their web presence as part of the festive preparations,’ said Mr Zimmerman.

‘Roy Morgan’s retail business confidence measure has steadily improved after a midyear downturn and is now tracking for the last six months better than the same period last year, in a good indication retailers are more confident in the approach to this year’s Christmas season.

‘In 2011, the ARA predicted sales would be $39.5 billion in the lead up to Christmas, and the actual figure came in at $39.7 billion, so as one would expect from the peak retail industry body, the ARA has been accurate in its retail spending predictions over the years.’