Christmas sales down – unless they are up!

According to marker researcher IBISworld, Australian retailers are expected to struggle with falling December sales…But if alternative predictions from the ARA and Roy Morgan are on the money, the opposite will be true – pre-Christmas sales across all categories of products and all states are expected to grow by around 3 percent, reaching $50 billion for the first time.

This is how the miserablists at IBISWorld see things panning out: ‘Christmas retail spending is expected to stagnate this December, falling by 0.2 percent  compared to the same time last year. While not all categories are impacted, IBISWorld is attributing the overall decline to lower discretionary incomes, negative consumer sentiment, and price discounting across the retail sector.’

In the Electronic Goods Retailing category (in which we assume photographic gear resides), IBISWorld predicts: ‘Christmas spending on electronic goods is expected to decline, falling by 1.2 percent compared with last year, to total $1.7 billion. Despite continued advances in product design and technology, revenue has fallen due to strong price-based competition, progressive declines in the average price of some domestic appliance categories, and weak consumer sentiment. Falling discretionary incomes has also caused some households to postpone big-ticket sales, particularly computers and televisions.’

– Doesn’t sound too positive, does it? And even worse when you throw in the dreaded ‘Amazon Impact’: ‘Retailers will struggle to outperform over the 2017 holiday period,’ said IBISWorld analyst, Jason Aravanis. ‘Consumers are tending to transition to cheaper online retailers, particularly as the entrance of Amazon into the market increases the awareness of online platforms. Jewellery retailers, department stores, and electronic goods retailers are all expected to underperform this holiday season, although it isn’t all bad news – with liquor retailers, supermarkets, and online retailers expected experience some subdued growth over the period.’

Online reality check
But why does Mr Arvanis make that bald, bold claim: ‘Consumers are tending to transition to cheaper online retailers’? Is it just a vibe he is getting? Where’s the data? The ABS retail sales statistics show that online sales are indeed growing at a greater rate than in-store sales overall, but after 10 years or so as an established retailing channel, the ‘explosion’ in online sales we constantly read about sees online representing only 7.6 percent of total sales (ABS, to October, 2017), and over the past few years they have been flattening out. Then there’s the issue of Click and Collect sales, which may be credited to online but are impossible to deliver without a physical store from which to collect the purchased product….

It’s worth noting, also, that small and medium sized retailers saw the fastest growth in online sales, showing 4.1 per cent month-on-month growth in seasonally adjusted terms, according to internetretailing.com.au. Small and medium businesses represent just over a third of all online sales in Australia.

Onlines sales are both a threat and opportunity, according to IBISWorld, as increasing sales in the channel are at lower margins: ‘IBISWorld expects [online] spending during December to grow by 15 percent from last year as budget-conscious consumers seek discounted items and Amazon increases the popularity of online shopping. Per capita online spending this Christmas is expected to reach $83.34, up from $76.68 in the previous year,’ said Mr Aravanis.

(If online sales do grow 15 percent, and they are currently 7.6 percent, they will reach 8.7 percent in December. And it’s doubtful whether Amazon Australia is going to increase the popularity of online shopping any time soon given its flakey website, unexciting pricing and ordinary delivery times. Just sayin’)

The ARA and Roy Morgan, on the other hand, have a less gloomy set of predictions for Christmas sales, with growth up by an average of just under 3 percent overall. 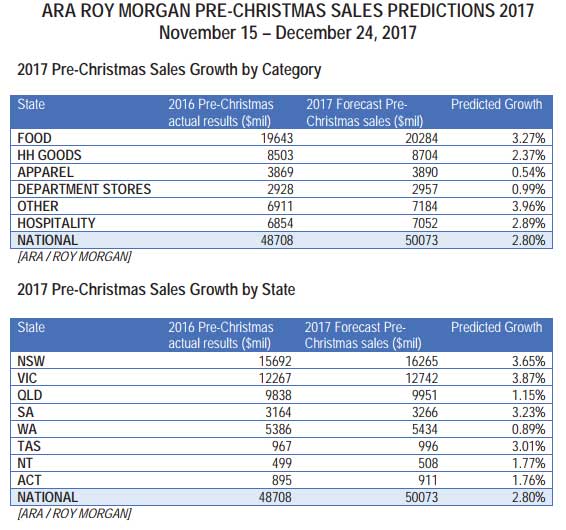 We followed up with Russell Zimmerman, executive director of the ARA, and he too had noted the discrepancy between the ARA figures and IBISWorld.

He said that on review, there were a number of indicators which support the Roy Morgan position, including a modest increase in both population and the CPI, and a drop in unemployment.

The economic health of NSW and Victoria, the two largest states, supported the positive prediction. As did retail sales growth data from the ABS.

He said on that basis, he had confidence in the Roy Morgan predictions.

‘The ARA has been doing this [Christmas sales predictions] for 30 years, the last seven or eight with Roy Morgan, and since then they have been more accurate,’ he said.

The ARA is one with IBISWorld is talking up the potential for growing online sales this Christmas, but has a more realistic take on where they will end up:  ‘Due to the ease and convenience online platforms provide Australian shoppers in the 24-hour marketplace, the ARA estimates online purchases will account for 13 percent of overall retail sales in the next five years.’

ABS sales figures will eventually prove either IBISWorld or the ARA or neither correct. Whatever the case, PhotoCounter hopes our readers Christmas 2017 sales enjoy a double digit increase!