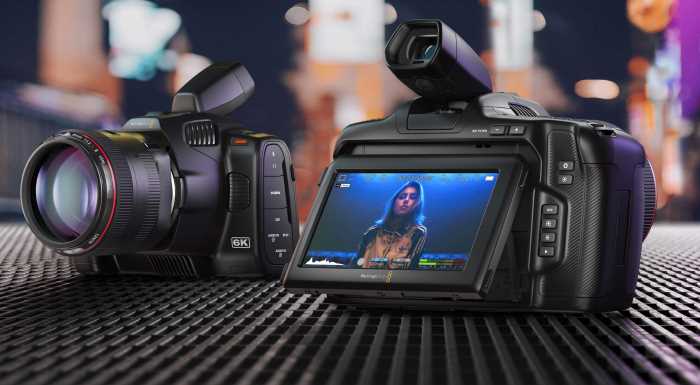 The camera has that old Blackmagic design, with some internal improvements such as the 5-inch tilting touchscreen LCD display (1920 x 1080 pixels) with 1500 nits of brightness.

The 6K Pro also has a built-in motor-driven ND filter with 2, 4 and 6 stop increments which Black Magic says filter both optical and infrared (IR) wavelengths. Battery pack has been swapped from a Canon LP-E6 to Sony NP-F570 batteries, which will improve battery life.An accessory Pro Grip will hold two batteries instead of one.

Price on the Blackmagic Australia website is US$2495, ex-GST.

Unlike a lot of photographic competitions, entry to the awards is free.

In partnership with Surfing Australia, the awards are open to Australian residents who can submit their best images and videos taken in 2020. There is a maximum of three photo entries per photographer and two video entries per videographer.

A panel of thirteen high-profile individuals within the surfing industry will be tasked with judging the entries to determine the best single surfing-themed photo and video. Among the impressive judging panel is seven-time World Surfing Champion and Nikon Brand Ambassador, Stephanie Gilmore, along with Layne Beachley, Phil Jarrat and Nick Carroll.

Creators can submit their entries via https://mynikonlife.com.au/surf, with submissions closing on Friday, March 15.

The new 70-300mm has dual IS and macro capability. The dust/splash-resistant design withstands use under harsh conditions down to a temperature of -10 degrees Celsius. In addition, the fluorine coating on the front element repels water and oil.

With a minimum focusing distance of 54cm, the lens achieves maximum magnification of 0.5x
(at 300mm) for macro photography and videography. A circular aperture with an 11-bladed iris
diaphragm provides beautifully rounded bokeh effects.

With camera and lens stabilisation combines, Panasonic is claiming 5.5 stops slower shutter speed for the 70-300mm.

Design is 17 lens elements in 11 groups ‘including 1 UED (Ultra Extra-low Dispersion)
lens, 2 ED (Extra-low Dispersion) lenses and 1 UHR (Ultra-High Refractive Index) suppressing both
axial chromatic aberration at tele-end and chromatic aberration of magnification at wide-end. The
UHR lens achieves uniform image quality from the centre to the edges of the image while contributing
to the downsizing of the lens unit. The lens excels in video recording performance with a mechanism
that minimises focus breathing, and focus shift is suppressed during zooming with an exceptional
zoom tracking performance so that the subject is always in clear focus,’ according to the press release.

Nikon has announced that Firmware 1.10 for the Z7II and Z6II full-frame mirrorless cameras will be released on February 25.

In addition, the update provides support for 4K UHD/60p for the Z 6II.

Firmware Ver. 1.10 will be available at the Nikon Download Center: https://downloadcenter. nikonimglib.com

The much-announced Pentax K-3 Mk III was originally heralded last October and set for release during CP+ (Feb 25 – 28), but no longer.

Parts supply is the issue for the APS-C format DSLR.

‘As some of the product parts are delayed, and we have determined that development will require a greater amount of time for us to achieve the exceptional performance and finest quality that is the hallmark of next aps-c flagship model,’ states Ricoh. There’s no re-scheduled release date.

Some websites have speculated as to whether the delay relates to the AKM fire we reported on exclusively back in November.