David Alan Harvey ‘will not be cancelled’, flags defamation suit

In August 2020, Magnum announced Harvey’s one-year suspension over a single undescribed harassment allegation breaching the organisation’s 2018 Code of Conduct. The allegation is unrelated to an Fstoppers article published months earlier, which unearthed a 1989 photo series by Harvey on Bangkok sex workers in Magnum’s archive. Some photos showed topless nudity along with tags suggesting the subjects were children.

Fstoppers and others concluded the tags were solid evidence Harvey photographed naked children, potentially constituting the distribution of child pornography and child abuse.

Magnum issued a statement that it had ‘been alerted to historical material in our archive that is problematic in terms of imagery, captioning or keywording and we are taking this extremely seriously’. A spokesperson later clarified to Fstoppers a ‘mis-tagging’ issue led to the ‘mistaken conclusion that they (the photos) represent something they do not (child nudity)’.

Then in late-December Columbia Journalism Review (CJR) published an in-depth exposé, with 11 female photographers sharing allegations of inappropriate sexual behaviour from Harvey over a 13-year period. Magnum was criticised for a lack of transparency during its first investigation of Harvey, including the refusal to publish its 2018 members’ Code of Conduct due to it being a ‘confidential human resources document’. Magnum president, Olivia Arthur, later stated she didn’t want the document to be put on trial by Twitter.

As a result of the CJR article, Magnum launched another investigation into Harvey and invited CJR‘s sources to contribute. With pressure mounting Magnum also promised more future transparency and to publish its super-secret members’ Code of Conduct. An open letter, signed by almost 700 people, also demanded the immediate publication of the Code of Conduct.

Harvey, responding via his lawyer, issued a statement on Twitter in late-December following the CJR article. The photojournalist ‘intends to obtain relief through the appropriate legal tribunals to hold Magnum and other individuals accountable for the harm they have inflicted on his reputation’. 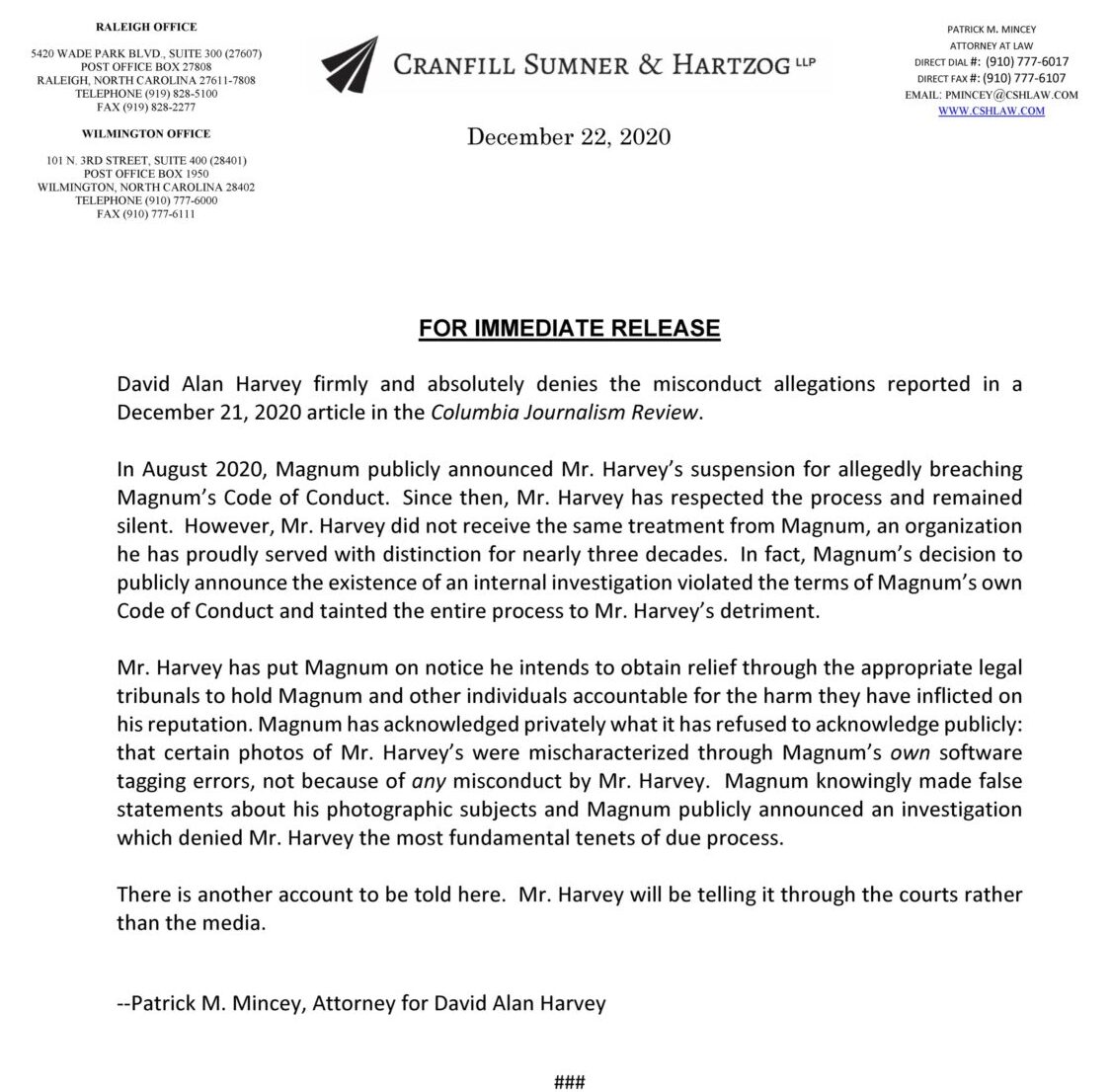 Harvey alleges Magnum ‘acknowledged privately what it has refused to acknowledge publicly: that certain photos of Mr. Harvey’s were characterised through Magnum’s own software tagging errors, not because of any misconduct by Mr. Harvey. Magnum knowingly made false statements about his photographic subjects and Magnum publicly announced an investigation which denied Mr. Harvey the most fundamental tenets of due process’.

It’s unclear what Harvey’s lawyer means by ‘knowingly made false statements’, as Inside Imaging found Magnum acknowledged it was a tagging error, but according to the statement Harvey’s account will be told ‘through the courts rather than the media’. And despite a Magnum spokesperson telling Fstoppers it was a ‘mis-tagging’ error, it appears some people still believe Harvey’s ‘problematic photos’ show minors.

Likewise, the open letter calls on Magnum to ‘take full responsibility for addressing… the institutional practices that have raised alarming concerns about exploitation of minors.’

The Code of Conduct
Magnum suspiciously didn’t publish its 2018 Code of Conduct, and instead issued a revised version labelled the 2021 Code of Conduct. It claims to have done this due to a confidentially clause, and it’s strange this clause was never mentioned when there were demands the document go public.

‘The principles behind the 2021 Code of Conduct are the same as in 2018 – the values, standards, and ethics have not changed. Magnum is wholly committed to fostering a dignified, inclusive, and welcoming environment that respects each person’s rights and individual worth.
Here’s Magnum’s explanation to why it revised the Code of Conduct:
The 2018 Code was an internal document that had a confidentiality clause preventing its publication. This has been removed which allows us to make the policy openly available.
We have taken other steps as well. As an internal document, the 2018 Code described how photographers and employees can make complaints and did not address members of the public. Magnum’s new Public Complaints Policy provides this guidance in one place, describing how people can report issues and our procedures for taking matters forward.’

So what’s in the six-page Code of Conduct? The Code focusses entirely on harassment, discrimination, bullying and inappropriate behaviour. The requirements seem reasonable, and it’s hard to imagine there being a ferocious trial by a Twitter mob over anti-harassment initiatives.

‘This Code prohibits all forms of discrimination and harassment including sexual harassment and other verbal, physical or visual conduct that denigrates or shows hostility or aversion toward a person (or such person’s relatives, friends, or associates) because of or based upon certain characteristics, including but not limited to sexual orientation, race, ethnicity, culture, national origin, social and economic class, education level, colour, immigration status, sex, gender identity or expression, age, size, family status, political belief, religion, or mental and physical ability.’

It’s surprising there are no clauses covering other photojournalist ethics, including issues like staging, excessive post-processing, accurate captioning, etc. Although there is possibly another confidentiual internal Magnum document covering ethics. Read the Code here.

As for David Allen Harvey, he responded on January 5, again via his lawyer on Twitter, welcoming the second investigation based on the CJR report. 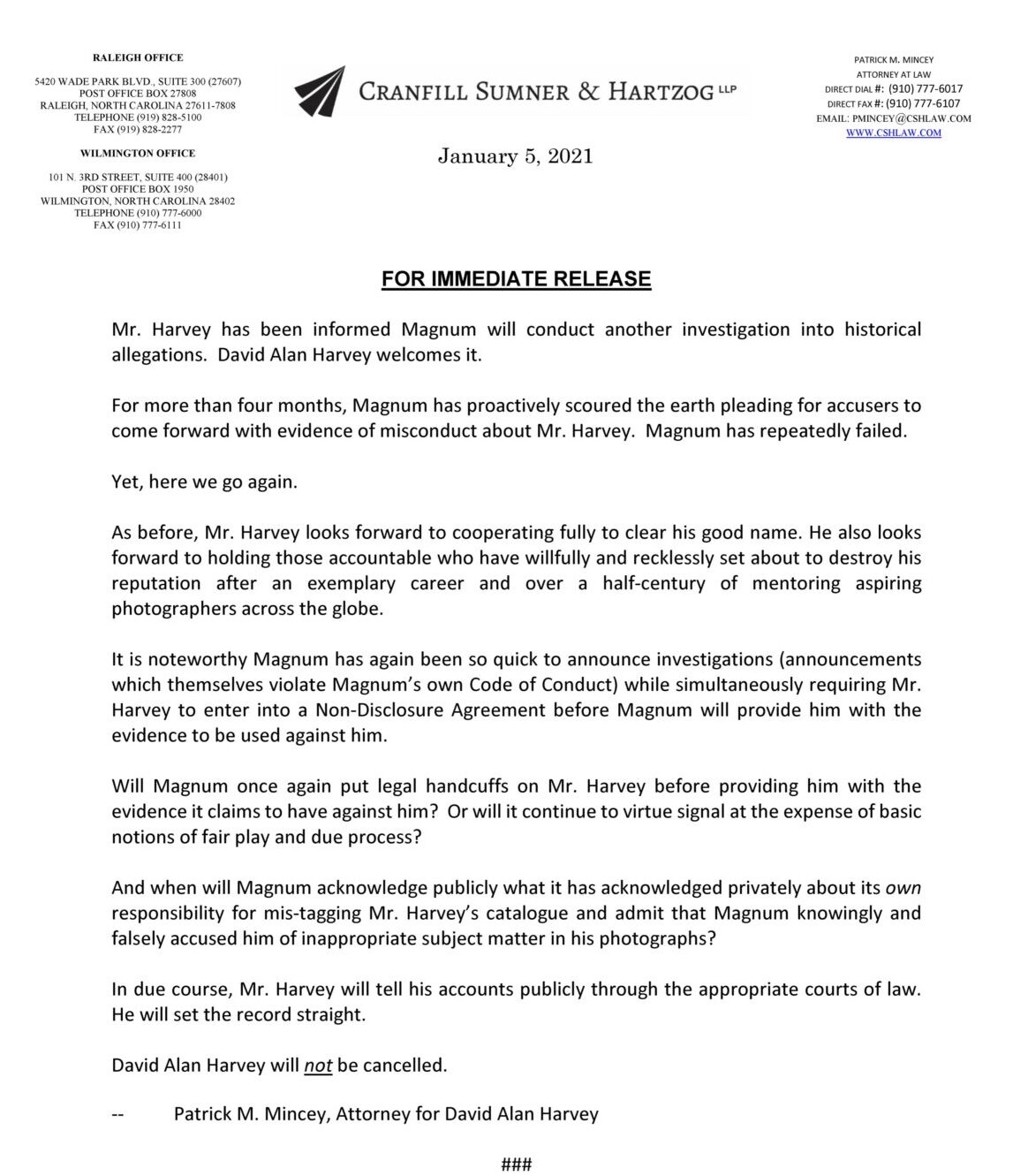 ‘Mr. Harvey has been informed Magnum will conduct another investigation into historical allegations. David Alan Harvey welcomes it.

‘For more than four months, Magnum has proactively scoured the earth pleading for accusers to come forward with evidence of misconduct about Mr. Harvey. Magnum has repeatedly failed. Yet, here we go again.’

The letter goes on to state Harvey ‘looks forward to holding those accountable who have wilfully and recklessly set about to destroy his reputation’. It points out how Magnum was quick to ‘virtue signal’ by announcing an investigation, while simultaneously forcing Harvey to sign a non-disclosure agreement before providing evidence to be used against him.

It finishes with ‘David Alan Harvey will not be cancelled’. So this is far from over. More to come!