Nikon has announced the $2599 Z5, a new full-frame mirrorless at the budget end of the lineup, along with the new Nikkor  Z 24-50mm f/4-6.3, the shortest, lightest and most affordable full-frame zoom lens to date.

Nikon Australia, however, was late to issue a press release, so while the new camera will be available in August in other parts of the world and has a US$1400 body only price, we don’t have any local details. However Digital Camera Warehouse has the camera for pre-order for $2599, body only.

Key features include:
– A 24.3-megapixel CMOS sensor, combined with the EXPEED 6 image processor;
– An ISO range up to 51,200 (expandable to 102,400);
– Shutter speeds up to 1/8000, and full resolution bursts at 4.5 fps with full AF/AE;
– Dual UHS-II SD Card Slots;
– 273 on-sensor AF points, with Eye-Detection AF capabilities for humans and animals;
– 20 Creative Picture Controls, and advanced features like Focus Shift Shooting and multiple exposure mode;
– 4K UHD/30p video (cropped) or 1080/60p (full-frame) with in-camera VR image stabilization and electronic VR, plus focus peaking and the ability to capture stills while recording.
– A new Time-Lapse Movie mode that gives users the ability to use images from interval timer mode and create a time-lapse in-camera;
– Nikon SnapBridge app, built-in Wi-Fi and Bluetooth connectivity; 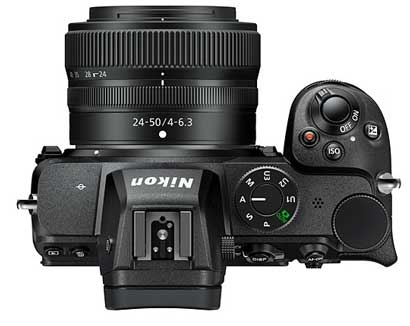 The Nikon Z5 doesn’t have an LCD information screen on top like its full-frame siblings.- Durable, weather-sealed exterior, with the same magnesium alloy shell as the Z6 and Z7;
– A high-resolution 3.2-inch LCD monitor with the capabilities to tilt, touch, tap, swipe, and pinch complemented by a 3.6M-dot Quad-VGA EVF with exposure, ISO, white balance and creative picture controls;
– Powered by the new EN-EL15c battery, the Z5 offers more shots per charge and is the first Nikon camera to enable constant power through the USB port, even with select portable USB power banks. The camera is also compatible with the MB-N10 hot-swappable battery pack.
-When connected via the USB-C cord, the Z5 can be used as a webcam.

The NIKKOR Z 24-50mm f/4-6.3 is the smallest FX-format Nikkor lens yet. It is less than three inches long when retracted. It will be available in the US in August with a suggested price of US$400.

Two new teleconverters have also been announced,  with late-August (US) availability. The Z Teleconverter TC-1.4X (US$550) and Z Teleconverter TC-2.0X (US$600). The new teleconverters allow Nikon Z series cameras to retain functionality on all focus points up to f/11, making it easy to focus on and track subjects throughout the entire frame. They are designed with a fluorine coating on the front and rear elements to resist dirt and smudges, and have weather-sealing.

These new teleconverters will also be compatible with applicable interchangeable lenses for Nikon Z mount mirrorless cameras that Nikon will release in the future.

NOTE: It beggars belief that Nikon Australia couldn’t get sufficiently motivated to issue a local press release in time for what will be a make-or-break model for the struggling camera maker. We are living in weird times!