The Eastman Kodak Company is, in its own words, subject to substantial doubt about its ability to continue as a going concern. 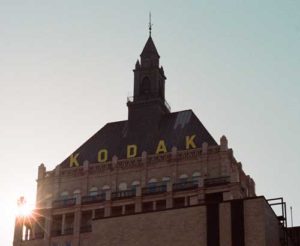 This was made public in the 2019 Annual Report, released at the end of March this year.

Inside Imaging initially looked into the EKC report to see how Kodak film sales were tracking, but the many references to doubts about the 140-year old company’s ability to continue as a going concern seemed a much more important story.

Under the heading ‘Going Concern’ the report states: ‘Kodak is facing liquidity challenges due to operating losses and low or negative cash flow from operations… The current cash balance outside of China, recent trend of low or negative operating cash flow, maturity and redemption dates in 2021 for the Convertible Notes and Series A Preferred Stock and lack of certainty regarding a sustainable return to positive cash flow raise substantial doubt about Kodak’s ability to continue as a going concern.’

The ‘Convertible Notes’ and ‘Series A Preferred Stock’ referred to are two of the three big pots of Eastman Kodak debt. The other one is its Asset Backed Loan (ABL) credit agreement, which also matures in 2021.

The Annual Report came out on March 17, before the true economic impact of Coronavirus was realised, although there are several references in the obligatory Risk Factors section of the 10K Annual Report to the epidemic’s potential to further weaken global economic conditions. If EKC was under the pump before Coronavirus, it must be more so now, given cash generation is imperative for it to survive.

EKC’s apparently dire financial state prompted us to seek clarification from Kurt Jaeckels, Eastman Kodak worldwide director, Communications. On the doubts expressed about whether the company could continue as a going concern he responded: ‘Yes, these statements reflect the reality as assessed and reported by Kodak management.’ He qualified this in noting: ‘The accounting rules used to perform these assessments are very prescriptive and discount management’s plans very heavily.’

Eastman Kodak’s problems aren’t with its day-to-day operations, which are delivering results which, while not spectacular, are certainly sufficient to keep the liquidators at bay. It is being gradually diminished by a crushing weight of debt.

The less bad news is that it was able to honour a US$395 million First Lien debt commitment in 2019, and there are no other major obligations to repay until 2021, giving the company a little breathing space.

But if Eastman Kodak hadn’t sold its profitable Flexographic Packaging Division in the fourth quarter of 2019 for US$340 million, it would have been challenged to come up with the aforementioned US$395 million. Selling off profitable bits of the company to service debts doesn’t seem like a sustainable business model. To make up the difference and for ‘general corporate purposes’ a fresh US$100 million in credit was secured via Convertible Notes, and this is due for repayment or renegotiation in November 2021.

‘If Kodak is unable to amend, extend or refinance the obligations under the Convertible Notes, ABL Credit Agreement or Series A Preferred Stock before they become due, its ability to continue as a going concern would likely be impaired.’

Given Kodak’s non-investment grade (‘junk’) credit rating, and its poor recent track record in generating cash from operations, it will have a hard time meeting its repayment obligations.

In fact it already dodged a bullet this year. Under the terms of the ABL Credit Agreement, Eastman Kodak actually defaulted in 2019. The technical ‘default’ seems to revolve around auditors’ doubts about EKC as a – that term again –  ‘going concern’. If auditors express doubts about the businesses’ viability, it triggers a default according to the terms of the contract.

The lenders, Bank of America and JPMorgan Chase Bank subsequently had the right to ‘declare all of the Company’s outstanding obligations under the ABL Credit Agreement, together with accrued interest and fees, to be immediately due and payable. In addition, the agent under the ABL Credit Agreement may, and at the request of the requisite lenders must, terminate the lenders’ commitments under that facility and cease making further loans.’

‘There can be no assurance that Kodak will be able to obtain such a waiver if a Going Concern explanatory paragraph is contained in the audit report with respect to Kodak’s annual financial statements for future years.’

We asked Kurt Jaekels whether Eastman Kodak management is confident it will be able to meet its obligations on May 26, 2021, the maturity date of the ABL Credit Agreement and November 2021, when the Convertible Notes and Series A Preferred Stock redemptions fall due: ‘Kodak is in the process of moving to positive cash flow generation needed to demonstrate the ability to meet the obligations,’ he responded. ‘While we are confident we can address the maturity in 2021, the accounting rules only allow a company to use what is 100 percent certain or, in other words, financial performance as of a given financial statement date.

‘We cannot use forward-looking projections or statements.’