After a lengthy hiatus, Inside Imaging has revived the popular Pictures@the exhibitions – a collection of photography-related events happening soon across the country.

In this edition we look at exhibitions, as the headline suggests, by emerging and established Australian photographers. The current crop of shows taking place in Melbourne, Canberra (and Ballarat!) is top notch, and too good to miss.

Readers are invited to participate and be featured in Pictures, by e-mailing events to wills@insideimaging.com.au.

Petrina Hicks – Beached Gothic
National Gallery of Victoria
Petrina Hicks: Bleached Gothic is the first major survey exhibition of the celebrated Australian photographer. Over her 15-year career, the Sydney-based artist has gained a strong reputation for her enigmatic and multi-layered photographs. The exhibition includes more than 40 photographs and five video works spanning the period 2003 to 2019.

Here’s the NGV summary:
Hicks draws on the aesthetics and techniques she developed during her previous career as a commercial photographer. She recreates the allure of advertising and portraiture in her pristine images and, at first glance, Hicks’s works can appear to be a celebration of the perfect; a vision of bodily utopianism augmented by her technically pristine lighting and printing. However, on closer viewing the hairline cracks become evident. Hicks draws us towards considering bodily marks – the fading bruise on the flesh, the slight wound on the skin, the tousled hair, the missing limb – as her seemingly faultless models occasionally show the signs of our inexorable transit towards decay.
The tension between seduction and danger, familiarity and strangeness, intimacy and distance are present in many of Hicks’s works. Women, girls, and animals are recurring subjects and Hicks takes inspiration from mythology and art history. In one work, a white snake coiling around a pale arm evokes biblical notions of purity, while a reclining nude cradling aged ceramic vessels is a play on a classical Greek motif. Hicks explores the disquieting power of mythologies and has referred to her own work as having a ‘bleached Gothic’ sensibility, suggesting it possesses mysterious Gothic elements stripped of their characteristic darkness.
Showing at the NGV Ian Potter Centre now until March 29, 2020

The Look
National Portrait Gallery
Featuring 68 striking photographic portraits of contemporary figures from the National Portrait Gallery collection, with the Gallery describing The Look as ‘an aesthetic treat with a lashing of je ne sais quoi‘. For those unfamiliar with French phrases sometimes borrowed by English speakers, this means the portraits posses an indescribable distinctive quality.

After its run at the National Portrait Gallery, the exhibition will undertake a 2020/21 regional east coast tour, with dates scheduled for Geelong, Ipswich, Port Macquarie, Tweed Regional Gallery.
Until February 9, 2020.

Salon is one of CCP’s major events for the year, with it providing an invaluable opportunity for both emerging and established photographers to exhibit their work. All entries are printed and line the walls, from floor to ceiling. There’s also over $17,000 in prizes up for grabs for entrants.
Opening on November 22 until December 15.

Mieke Boynton – One Year
Fairbanks Eye Gallery, Ballarat
Following Mieke Boynton’s aerial landscape photo exhibition, Skyview, that appeared at Fairbanks as part of the Ballarat International Foto Biennale, the award-winning photographer was invited to show more images. Peter Fairbanks, gallery founder, told Inside Imaging that Skyview was the most successful exhibition the gallery has had, with record sales and visitors during two months.

From 2018 to 2019, Boynton spent much time globe trotting. The result is One Year, a collection of large photographs, captured in Norway, Madagascar, Iceland, Morocco, the Kimberley, the Blue Mountains and Tasmania. Not to mention a few pictures of beautiful Victoria.
Showing until December 7 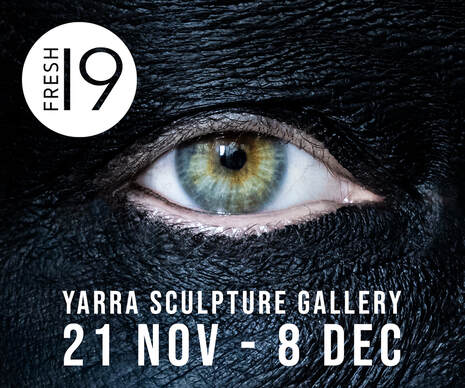 PSC Graduates – Fresh 19
Yarra Sculpture Gallery
To celebrate graduation, final year students from Photography Studies College Art Major will showcase their collections at the Yarra Sculpture Gallery. Eight emerging photographers will demonstrate their photographic talent in Fresh 19. Their collections touch upon formidable realities such as human mortality and impermanence, the female psyche and feelings of shame, the role of heredity and environment in human development, an exploration of the essence of cosmic consciousness and many others. These themes are depicted through a diverse range of work including large-scale photography prints, photobooks, video projection installations and a return to the past with the pinhole camera. The photographers are Susan Brunialti, Agata Mayes, Angie Bye, Denise Lawry, Neen Magro, Sally Thomas, Zina Sofer and Alex Rogers.
Opening November 21 until December 8

Murray Fredericks – Array
Arc One
Array is the final cycle in Murray Fredericks’ acclaimed 16-year-long Salt Project. The photos are captured at Kati Thandi (Lake Eyre) in South Australia. Fredericks lugs large mirrors out to the location, and captures them as they make reflections of the quite trippy and extraordinary landscape. Or, as Arc One puts it:
‘In these new works the artist intersects endless space through the ethereal reflective quality of mirrors. Rather than employing the mirror as a symbol of self-reflection, Fredericks redirects our gaze away from ourselves and into the immense environment. His translations of the language of landscape verge on otherworldly; reflections hover together as geometric forms, apertures or portals, offering a dual experience of looking both into another realm and out, as the lake’s glass-like surface mirrors an infinite space above. In one moment, an ensemble of sky and surface meld into a symphony of stars under Fredericks’ powerful control. These works plunge the viewer into a mesmerising spatial gestalt as Fredericks dissolves the contours of the landscape into a limitless optical deception. Place is defined by boundless empty space, as his own reflections on landscape mediate and expand what we see. Offering the viewer an emotional engagement with the environment, we see evidence of greater forces at work. There is a sense of release as the self dissolves into the light and infinity. The residue is a signature of an artist who finds the deep layers of his work by revealing the inexhaustible depth of what is already there.’
Until December 19