Fujifilm’s GFX100 mirrorless medium-format camera, with a 102-megapixel 55mm sensor, will be available from late June for $16,499. 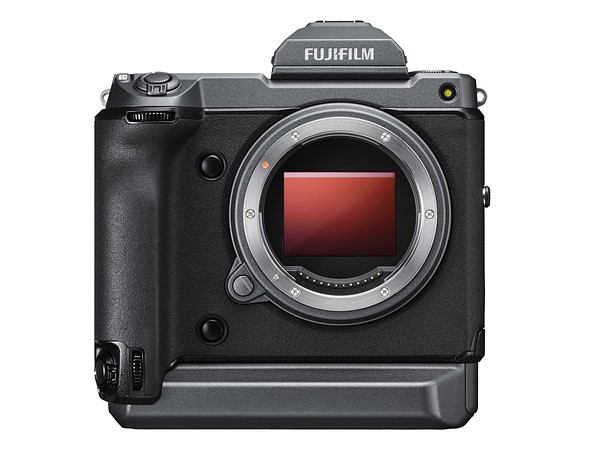 ‘This sets a new standard in AF speed and precision for large format cameras performing Single Point, Zone and Wide Tracking AF,’ Fujifilm says. ‘When using a prime lens with a heavy set of focus lens elements, the GFX100 achieves a speed improvement of up to 210 percent over a regular AF system.’

The five-axis IBIS system offers 5.5 stops of image stabilisation, with the GF63mmF2.8 R W, and has a sensor shift mechanism ensures images are stable against pitch, yaw, and shift and roll movements. The shutter is suspended with four springs to minimise the effect of shutter shock, broadening the scope of handheld shooting.

The GFX100 sports the same detachable EVF system of the GFX50S, which can be adjusted using the EVF Tilting Adapter EVF-TL1. Fujifilm developed the EVF unit with the, wait for it, ‘world’s highest resolution 5.76 million dot OLED panel’. The viewfinder has a magnification of .86x and contains five optical glass elements including aspherical elements.

EVF can be set to Frame Rate Priority, Resolution Priority, or AF Speed Priority mode based on the subject characteristics.

‘The GFX100 uses oversampling with data equivalent to approx. 50.5 megapixels to render video. It also supports the highly efficient H.265/HEVC codec, as well as “F-Log” which has a gamma curve with a wide dynamic range and the “Hybrid Log Gamma (HLG)” for recording HDR footage with ease. The GFX100 is also the first model in the GFX System to incorporate the “ETERNA” cinema film situation mode.’

The large sensor is packaged inside a body equivalent to the size and weight of a 35mm full-frame DSLR – 1.3KG. To put it in perspective, the GFX100 is lighter and smaller than a Canon 1Dx Mk II (1.5KG) and Nikon D5 (1.4KG).