The eighth Ballarat International Foto Biennale (BIFB) has served up an intriguing assortment of exhibitions for its Core Program, which attempts to ‘renegotiate photography’ by ambitiously incorporating other artistic mediums into the event.

Once every two years, BIFB takes control of Victoria’s historic gold rush city. This year the event has been extended to two months, with exhibitions and installations in buildings, down laneways, in cafes, bars, galleries and shops until October 20.

Many attendees visit with a thirst for printed photos, a quench that’s difficult to satisfy these days. This year photography appears alongside sculptures and installations, video art, non-photographic prints, and a few other bibs and bobs.

‘Photography is no longer the realm of the photographer – artists play a huge role,’ Fiona Sweet, BIFB artistic director, told The Age – a comment which perhaps indicates where she is taking the (foto) Biennale. (Kind of, ‘photography is far too important to be left in the hands of photographers you know’.)

With the festival embracing new concepts like ‘renegotiating photography’ and ‘challenging the photographic medium’, there is an underlying sense that BIFB is distancing itself from ordinary folk who perhaps don’t know much about fine art, but know what they like about photogaphy.

Contemporary and fine art photography takes center stage at BIFB, including downright obscure ‘pushing-the-boundaries’ projects. This isn’t ordinarily an issue – a dose of weirdness is always welcome – but there was a distinct lack of other styles, such as documentary or fashion photography. Perhaps these accessible, bread-and-butter applications of photographic skill are just too darn photographic.

Documentary photography is one of the most appreciated and impactful genres of photography, with people around the world engaging with it. It can and has helped change the world. Is it not an oversight by organisers to not include more of this pivotal genre? The high-impact World Press Photo and Walkley Award finalists exhibitions would have been available via a phone call or two to the sponsors. Likewise, the entire practice of fashion photography is represented by a Myer window exhibition of 1980s Vogue magazine photos by venerable Australian photographer, Monty Coles.

In several instances, photography is the vessel used to showcase art pieces. Robbie Rowlands’ Incremental Loss and Noémie Goudal’s Teluris are sculpture-based projects that simply been photographed. Even the headliner, Camouflage, by Liu Bolin is more about the painting rather than the photograph.

Again, this wouldn’t be worth mentioning if perhaps more ‘mainstream photography’ was presented at BIFB. As the inventor of the Biennale noted on Facebook of this year’s Festival: ‘I  went hoping for a feast of great photography, but came home feeling a bit peckish!

Nonetheless, a day at the Biennale is a good day out. Regardless.

Highlights and lowlights
Inside Imaging‘s party of three were left speechless by A History Of Misogyny, Chapter One: On Abortion, by Spanish multidisciplinary artist, Laia Abril. It’s showing at the new National Centre of Photography, housed in Ballarat’s former Union Bank building.

It’s the most confronting exhibition, with Abril’s captions telling horrific accounts of women from around the world who sought abortion, despite the procedure being illegal. The storytelling is held together by captions that are aided by portraits, cold images of objects used for medieval ‘home methods’, newspaper clippings, and video.

The exhibition is a long-term research project that incorporates photography. With the topic of abortion still divisive  in Australia and abroad, it’s breathtaking to consider the lengths women are forced to go to in some parts of the world, and in earlier times, to terminate a pregnancy.

Also showing at the Centre is another long-term research project, but this one didn’t quite hit the mark. Stock Market, by French artist Mathieu Asselin, explores ‘the reckless history of growth of the global biotechnology corporation Monsanto’. 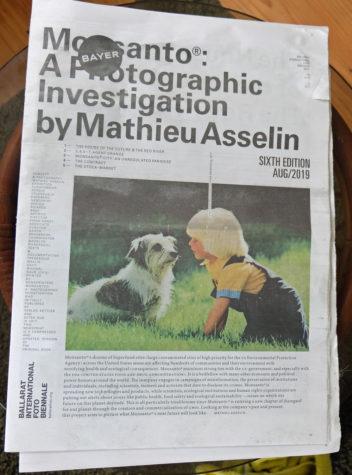 The exhibition consists primarily of prints of newspaper clippings, a couple portraits of farmers who battled Monsanto in court, a large print of two smug-looking corporate Monsanto suits, and video footage of a farmer’s life being ruined as he’s sentenced in court.

Stock Market also includes free mock newspapers for visitors to take, which includes more investigative information such as archival documents and photos. It’s a nice touch to an otherwise lacklustre exhibition. Another group of visitors attending at the same time as us, with cameras slung over their shoulders, spent maybe a couple minutes in the space before stuffing a paper into their free BIFB tote bags and ducking out.

We met the group again upstairs, at Incremental Loss Part Two by Melbourne visual artist Rowlands. Before renovating the Union Bank Building to become the National Centre of Photography, Rowlands was commissioned to undertake a three-month residency. During this time he used power tools to tear apart and demolish the building’s fibres, creating abstract ‘sculptural interventions’ that resulted in Part One. Part Two is the series of photos showing Rowlands’ impressive creations.

As we have previously noted, it’s passing strange that the first commission by the National Centre of Photography is not photographic, but this is apparently how we’re renegotiating the art form.

It’s the second time The Mining Exchange has been dedicated entirely to work by indigenous artists. Here’s what we wrote in 2017:

‘The Gold Rush era was a major driver of Australian colonialism, and The Mining Exchange played an important role in this history – it’s where shares in mining companies were traded. Hosting… (an exhibition of indigenous work) within these walls has symbolic significance. The pictures explore themes of indigenous identity and experience, which radically changed when dispossession was brought about by colonisation.’

Just over the road in the Art Gallery of Ballarat is Camouflage by Chinese photographer Liu Bolin. It’s BIFB’s only ticketed event, costing $18 for entry.

For those who haven’t seen the targeted Facebook ads, or aren’t otherwise familiar with Bolin, he’s the ‘invisible man’ who disappears into locations by hand-painting an outfit to blend into the scene behind him.

It’s an impressive body of work, consisting of 55 images, and staggering to imagine the painstaking effort that goes into accurately painting the models to blend into a landscape. Bolin’s images are a visual trip, where a quick glance won’t always allow the eye to reveal the model. 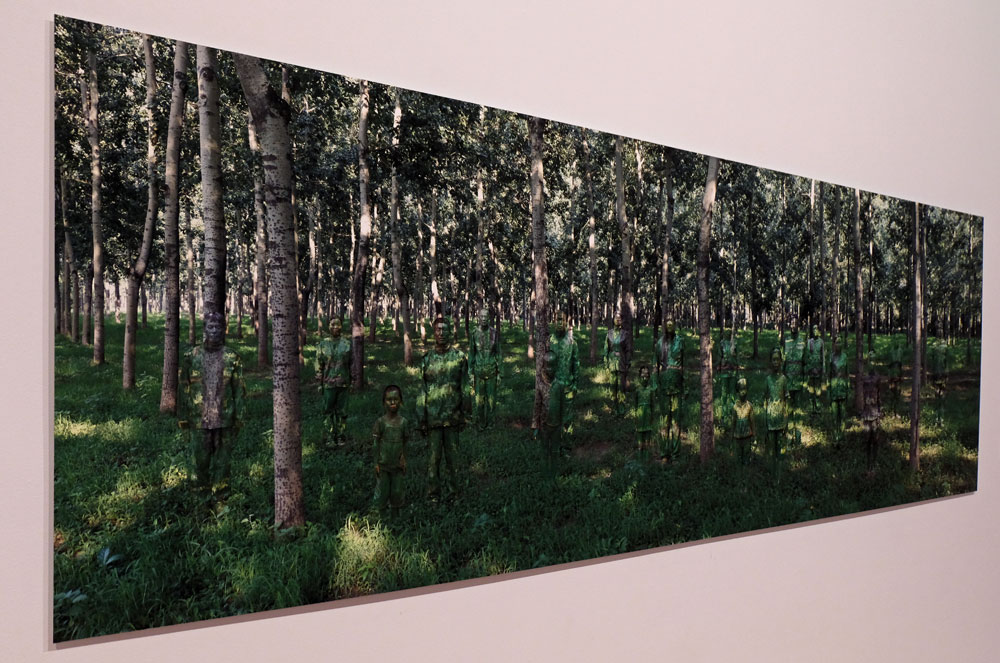 There’s many fun images, with Bolin blending into backgrounds with loud popping colours or in unusual locations. Others have a political or social message, such as a series of leaky boats or beaches with refugees painted into the scene. 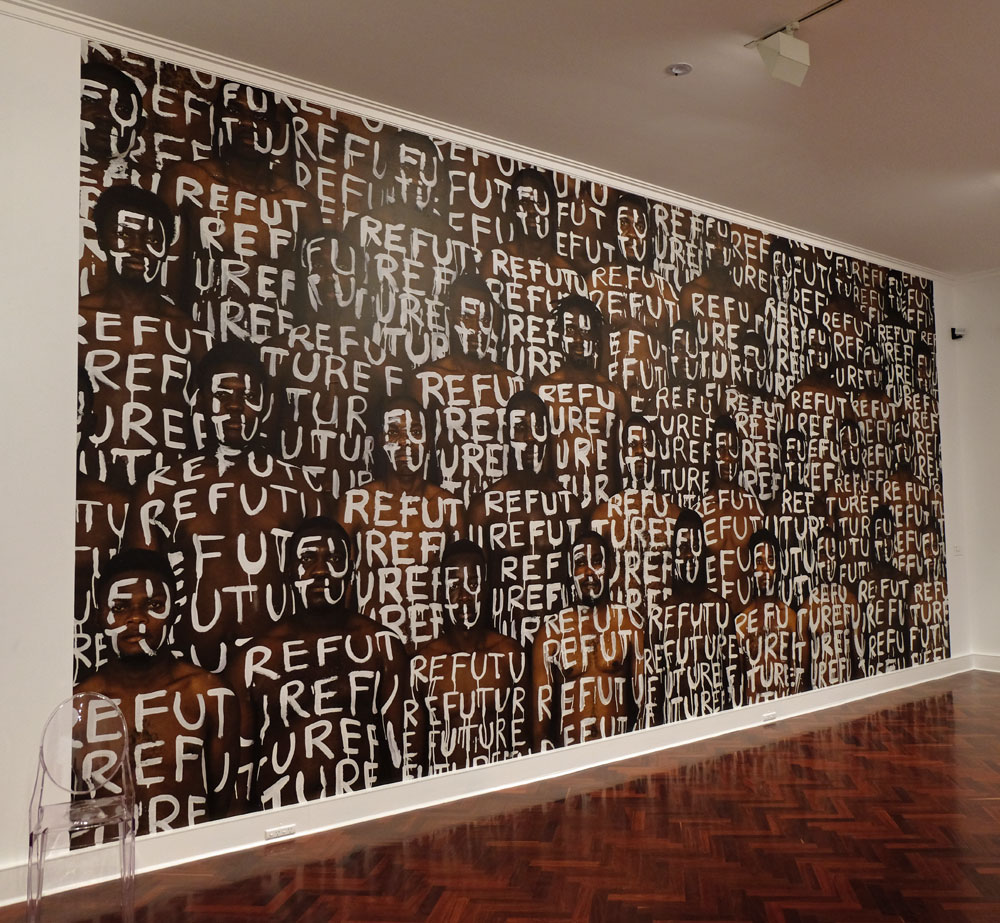 ‘Disappearing is not the main point of my work,’ Bolin said. ‘It’s just the method I use to pass on a message. It’s my way to convey all the anxiety I feel for human beings.’

The 55 prints were more than enough, with the singular concept running out of steam toward the end, but definitely worth the admission price.

Upstairs is Telluris, an installation by French artist Noémie Goudal which, like Rowlands’ show, consists of sculptures presented in photographic form. Goudal was the recipient of a $5000 grant, made ‘Pozible’ by a crowdfunding campaign, to build the quirky wooden frame from which her exhibition hangs.

A highlight for Inside Imaging was Soldiers by Israeli photographer, Adi Nes. The photos were produced between 1994 and 2000, with staged Renaissance-style photos of Israeli soldiers who blend macho masculinity, innocence, vulnerability and homoerotic sexuality. It’s one of the more ‘straight photography’ exhibitions, and a great series.

Capital, a exhibition curated by former CCP director Naomi Cass and Gareth Syvret, didn’t grab our attention for too long. This was perhaps attributable to the crew becoming hungry, with lunchtime approaching; or the sheer fact we spent all morning engulfed in contemporary/fine art. Patience was lost midway through reading a passage redolent of mystifying academia speak about a project involving a photo, a sculpture and a pile of shredded photos, that compared BitCoin with an ancient currency.

Documentary photography finally made an appearance in the Central Highlands Water archival photos. Armed with preconceived expectations that it would be a random selection of boring archival photos, we were disarmed to find the exhibition was surprisingly good. Old photos of burly blokes digging trenches; or a couple of chaps with mullets casually sipping on tinnies, ankle deep in a flooded house. What more could you ask for?

Inside Imaging visited most of the remaining Core Program exhibitions, many which were outdoor exhibitions.

To top off the day, we walked up to the Fairbanks Eye Gallery to check out an Open Program exhibition – Skyview, by AIPP 2019 Victorian Landscape POTY, Mieke Boynton. Skyview is a series of aerial photos captured in remote Western and South Australia, Iceland, and New Zealand, with each image showing an impressive array of colours and textures.

Many venues hosting Open Program exhibitions are cafes and restaurants, and during busy hours it feels slightly awkward to walk in, not buy anything, and interrupt customers by standing over them as they eat or drink.  The Fairbanks Eye Gallery is not like this, with half the space an optometrist and the other an actual gallery. Founder, Peter Fairbanks, went above and beyond to make visitors feel welcome and talk in-depth about the exhibit.

He had a refined understanding of Boynton’s creative process, including the gear she uses, as well as the stories behind each shot. He also knew her life story. Fairbanks seemed genuinely enthusiastic about photography, and also did considerable marketing for Boynton by scoring radio interviews and local media coverage.

It was no surprise that Fairbanks had hundreds of visitors through the gallery, with over 50 sales made (print editions as well as smaller products). Boynton told Inside Imaging she is thrilled with how Skyview performed. It’s her third solo exhibition, and the most sales she has made – still with a month to go.

So there you have it. BIFB # 8. If you have visited Ballarat to check it out, we’d love to hear your thoughts!