High-pressure sales tactics used by some studio portrait businesses are resulting in an alarming number of complaints, and this is having a negative impact on businesses with a less aggressive sales approach, according to a long-established Perth-based portrait photographer.

Hard-sell techniques, non-transparent pricing, and allegedly deceptive promotions are characteristics of a specific portrait photography business model that has left many clients feeling ripped off.

At the heart of the model is the use of vouchers or prizes for photo shoots, often given away by local car dealerships  and even mortgage brokers to ‘sweeten the deal’.

‘It is assumed that if you are a photography studio you are going to try to rip off the client. This mean potential clients turn to the “part-timers” who seem less pushy, more open and there is a sense they are less likely to try to price gouge you.’ – Perth portrait photographer

These tactics are typically used by portrait franchises and shopping centre-based studios, with several businesses developing notoriety on the internet as a consequence.

A respected Perth studio portrait photographer with over two decades experience, who asked not to be named, told Inside Imaging that she has had clients who had been scarred by previous portrait studio experiences.

‘People started coming through wanting baby and family photographs, who would on initial contact say they wanted to know up-front what the prices were,’ they said. ‘They had had a previous bad experience where they were left paying a small fortune for photographs after being pressured into buying them, with the threat that if they didn’t buy them, files would be destroyed.

‘It was literally every week we would take a call from someone immediately on the defensive when making an enquiry due to being previously put into a high pressure sales situation.’

The Perth photographer said that nine times out of 10 the studio was Viva Photography, a franchise with studios in WA and Victoria. Viva was founded by former AIPP president Vittorio Natoli, who is now also CEO of the new Emotions Wedding Photography franchise.  But there are other portrait studios across the country employing similar hard-sell tactics.

It need to be noted that disgruntled customers are not generally complaining about the quality of the work or professionalism of the photographers – even some one- and two-star reviews comment on the professionalism of the photography – but rather the sense that they have been coerced into spending more than they intended. Browsing various review sites, some clients more comfortable with the selling-up tactics employed still enjoyed the experience and the quality of the products they purchased, even though they were at higher-than-expected cost. 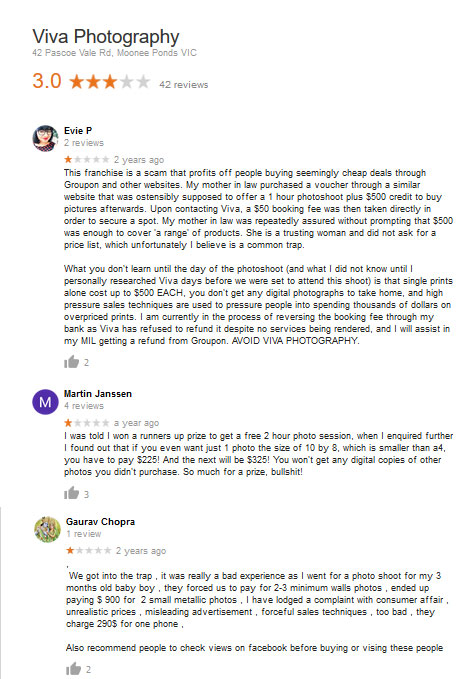 …And here’s another three ‘not happys’ for Verve Portraits in Claremont, Perth. (Tech writer, Lara Brindley, also published a humorous essay in 2014 on Medium titled The Verve Experience): 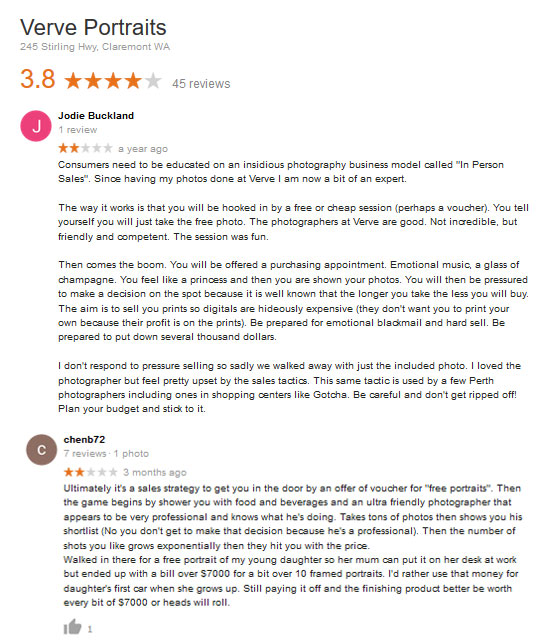 …Meanwhile up in sunny Sinny, You Studios Photography in Drummoyne is also in on the voucher tactic: 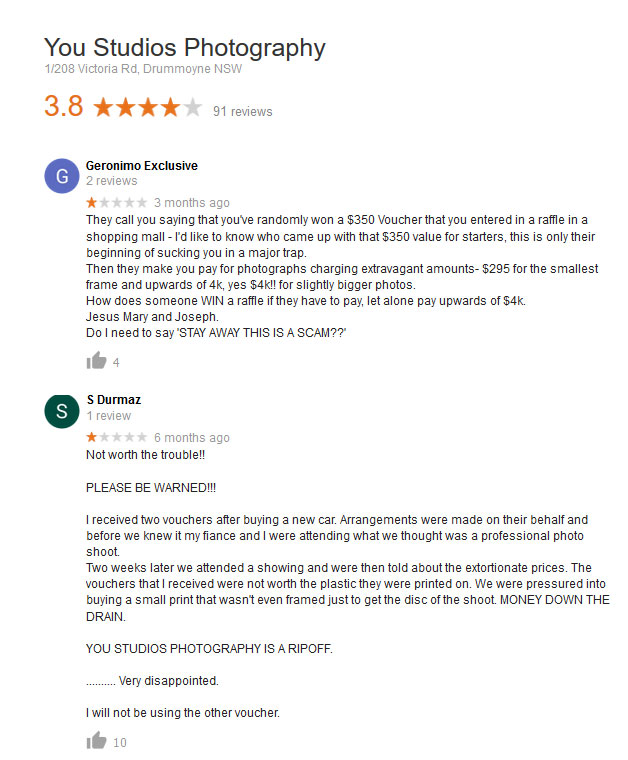 After winning a contest or receiving a voucher, and thus being led to believe the photography will come at little or no cost, the clients tend to feel duped.

‘It didn’t take long before these competition “wins” were pretty well-known and word spread on social media telling people to be wary of them,’ the Perth photographer said. ‘Other businesses, such as ourselves, would hold competitions and people were immediately sceptical of them. When shopping centre displays were still a good means of generating leads, we had many people tell us they wouldn’t enter any more competitions from photographers, as they had already “won” contests which had cost them thousands of dollars in the end.’

In certain instances, clients redeem their free gift print, but only after a fierce back-and-forth with the salesperson. Reports of customer service rapidly deteriorating afterwards, as well as long delays with receiving a free gift, or not receiving it at all, are all over the internet.

The one- and two-star reviews are remarkably similar. Interestingly, they are juxtaposed with five star reviews, primarily from happy customers who booked a session anticipating they would be paying upwards of $1000.

‘As it is a very emotionally connected product, it can also mean clients overlook the cost as all they see is how they managed to get granddad and the kids together, or their precious newborn baby in an image,’ the Perth photographer said.

‘For others, though, the experience is one where they have gone in without any information on costs and are left shell-shocked.  I am not sure what they do now but eight to 10 years ago if you called Viva you would not be able to get a price out of them for different products.  They would re-direct any questions away from letting you know what something would cost.  They (customers) are pressured into making a purchase beyond their budgets, as they are threatened with the images being deleted – and when its you precious newborn baby this seems like you are hurting the baby by allowing this to happen.’

Cheryl Lardner, Verve Portraits director of sales and marketing, told Inside Imaging that management is aware of the negative online views, but they represent a tiny minority of customers.

‘We at Verve strive towards a benchmark of 95 percent customer satisfaction as a minimum standard and currently are achieving a 96 percent CSQ (Customer Satisfaction Questionnaire) score. 100 percent would be fantastic, however as you would be aware, that is difficult to achieve. We actively seek feedback from all of our guests at regular points throughout the customer journey.’

Cheryl says Verve is ‘very transparent’ in regards to pricing from the beginning of the customer experience.

According to Verve’s website, prices start at $195 for a standard 90-minute shoot and $250 for an extended shoot. An 8×10 in a frame is included in the price. But both positive and negative reviews suggest prices quickly head into four figures. The lowest-priced actual, physical product – a small, framed print – ‘starts at’ $395, with most artwork options over $1000. For instance a small square album featuring 10 – 15 images ‘starts at’ $2445. If you want a lay-flat version, that will ‘start at’ $2995. 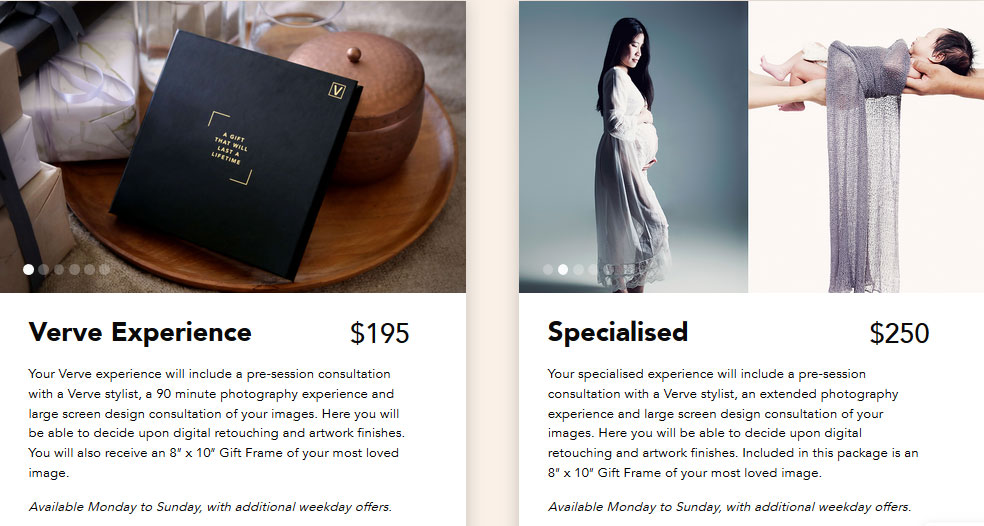 ‘Buy now, pay later’
Verve actually markets an HSBC credit card as a ‘buy now, pay later’ option with an interest-free period. The card costs $79 and attracts an interest rate of 25.99 percent, with a minimum Verve purchase of $1000 as part of the deal. So for only $79, you get to be in debt to a credit card company for at least $1000, at a near-usurious interest rate!

People may argue there’s nothing wrong with pushy sales tactics and tricky pricing – ‘buyer beware’ and all that. And pushing a client toward printed products and away from digital files is beneficial for both the industry and, ultimately, the client. And while the voucher-driven studio portrait experience may be an unpleasant surprise for some unsuspecting clients, it’s a proven business model that’s operated for decades in a tough market.

The Perth photographer said her full-time studio portrait business and others have been ‘tarred with the same brush’, which is driving clients away from the high-end studio.

‘It is assumed that if you are a photography studio you are going to try to rip off the client. This mean potential clients turn to the “part-timers” who seem less pushy, more open and there is a sense they are less likely to try to price gouge you. 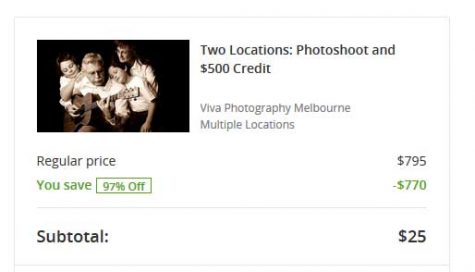 ‘There is also the problem that the public doesn’t understand why professional photography is priced at what it is, because after all it’s “just a digital file’ and that doesn’t cost anything – so when companies that do need to charge professional rates go well beyond that, it hurts everyone else in the industry.

‘It is interesting that these companies often have in their terms and conditions that there is no cooling off period and all sales are final.’

(Inside Imaging approached Viva Photography and You Photography for comment but there was no response by time of publication.)