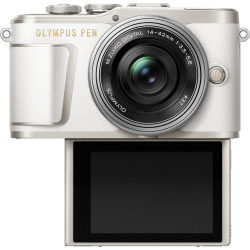 The camera has a flip down selfie screen, and 16 Art Filters designed to create insta-worthy images, which can be easily sent to a smart phone via the built-in Bluetooth or Wi-Fi.

The camera has in-body 3-axis Image Stabilisation, a new TruePic VIII processor that featured in the OM-D E-M1 Mk II, and 8.6 fps.

It will be available in black, white, and brown – with a blue version coming in June – for an RRP of $1099.

The recorder is designed to capture professional-quality audio or sound, either for video, live sound recordings, or interviews. It will be available from February with an RRP of $279. Click here for the press release.