When The New Camera House, Lismore NSW posted the pic below on its Facebook page, it really didn’t look like something store owner Jon Paterson and his team were going to recover from any time soon… 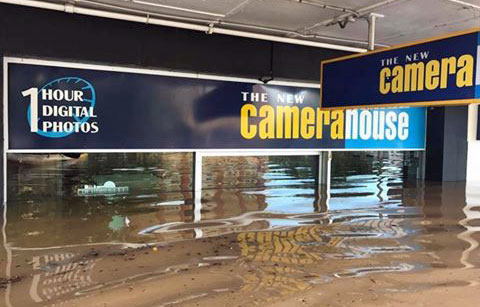 – So it was both amazing and heartening to read a few days later: ‘Prints are rolling at Camera House and spirits are high. Production is ready, fully stocked with great cameras and accessories. Passport Photos are ready to go. Re-opening this Monday, 10th April 8.30am, thank you everybody for your patience…’

‘The initial forecast was that we would get 250mm of rain over two days, which was not an issue,’ Jon told PhotoCounter. ‘But then came reports of moderate flooding in outlying areas. By 4pm flood warnings included the CBD and by 5.30 the SES was evacuating people.’ 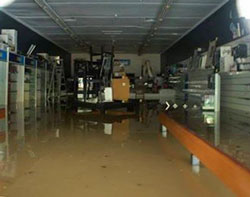 Refusing the SES order to evacuate, Jon and his team set to work on the impromptu ‘bump out’. They worked late into the night to move the entire inventory of The New Camera House to the upper floor of the building.

‘We were always aware of the potential for flooding, and the plan was to fully pack up in those circumstances,’ he said. Jon owns the building at 95 Keen Street in which The New Camera House is located, and he said the upper floor was a factor in the decision to acquire it 19 years ago.

By the next day water had been drained from the store and power was back on, and on the following day Jon posted: ‘I can happily report that 99.5 percent of our stock and plant and equipment was safely stored and not impacted. This includes all work in progress for our customers. My gratitude to my staff who rallied under duress to safely pack up as well as we could on Thursday night. Our losses will be largely administrative and shop fittings. The store will be closed at least until Wednesday.

As it happened, Wednesday turned out to be optimistic, but under the circumstances, optimism wasn’t such a bad characteristic! And a few days later, the store was indeed ready for business.

While Jon’s staff displayed tremendous loyalty and support in taking on the dirty work of cleaning the store out – and anyone who has been involved in the cleaning up after a flood will know just how dirty that work is – the broader photographic community also rallied around.

Support from suppliers has been incredible, said Jon. ‘A big call-out to Noritsu who replaced consummables at no cost.

‘Jesse Hunter from CameraPro (Brisbane) just showed up with some food and helped us clean up.’

Adam Wilson from Blonde Robot hired a truck, loaded it up with shop fitting donated by Bentleys (Camera House) on Sunday, and he and his wife Karly Wilson, from Profile Frames, drove down with the special delivery on Monday.

‘There have been so many messages of support from Camera House head office and the Camera House family,’ said Jon.

He said the local community had also been unbelievable, with people showing up to lend a hand or deliver baskets of food.

‘But above all, it’s been the incredible support from the tireless team of staff who donated some of their time to get us up and running again.’

While The New Camera House story is a positive one, it takes more than one store to re-open for a shopping precinct to come alive again, and the future is still uncertain for retailing in Lismore.

‘We copped a fair whack, but many businsses simply won’t re-open. The shoe shop next store lost $150K stock. The pharmacy $400K and its entire fit-out. Many stores suffered losses of $300-400K, and they won’t be able to cope. Most stores are still closed.

‘Restaurants lost fridges and freezers, cooking gear. They just didn’t have time to get things out.’

He urged the local community to stay loyal to local retailers on Facebook: ‘I have observed many businesses who will be harder hit than us. I would appeal to the community to be patient while their local businesses get back on track and reward them with your custom. Every cent will help many businesses deal with what is largely uninsurable losses.’

Flood insurance is prohibitively expensive in Lismore. Last time Jon sourced a quote it was $50K a year, but this was the first time in 19 years water entered the store.

When it comes to insurance cover, there is some discussion as to whether the damage was caused by a flooding event or a storm event, given the huge amount of water which fell in such a short time.

‘The doors are open but it may be a while before we see normal business return.

‘We are bruised, but it’s difficult to feel sorry for yourself when you see the outcome for others around you.

Nonetheless, the show must go on, and The New Camera House is about to get into two new businesses – photo booth hire and selling second hand gear.

‘We are buoyant and positive, and excited to be expanding the business into new areas,’ Jon concluded.