This year is surely one of the most ‘political’ in recent times, with the long-running phoney election campaign and the real election campaign which is about to replace it keeping the voters – and thus the retail economy – distracted and uncertain about future directions. 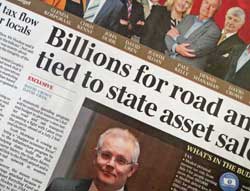 In our current PhotoCounter reader survey, 29 percent of respondents think the uncertainty surrounding the election will be have a severe impact on retail activity. Another 57 percent think it would have a moderate impact.

The budget, which will be announced tomorrow night, will shed some light on the policies the Coalition will take into the election, and based on a recent survey of small business clients by accountancy software specialist Reckon Limited, over a third (37 percent) of Australia’s SME’s are pessimistic about the impact the budget will have on their business, while only 23 percent are optimistic about its impact on their bottom line.

Within Victoria, 37 percent of SMEs said they were pessimistic about the forthcoming budget and 18 percent felt optimistic, with the remaining 45 percent saying they felt neither optimistic or pessimistic. (Numb, perhaps?).

The research of thousands of Reckon’s SME customers nationwide also found that a large majority (70 percent) also feel the current government is not doing enough to support small business with only 15 percent believing the government is doing enough.

‘As a company that champions SMEs, these findings are concerning for the confidence of the vital SME market across Australia. It’s critical that we create the right environment for Australian SME’s to succeed so that small businesses can actually get on with running their business and not caught up with unnecessary costs, time consuming tasks and red tape,’ said Clive Rabie, CEO, Reckon Limited.

‘SME’s are the lifeblood of the Australian community and Reckon…believes the Federal government’s budget needs to do more to help SMEs flourish. The Turnbull government must create a more entrepreneurial, less bureaucratic economy that rewards startups giving it a go and allows failure and the ability to learn and start again,’ added Clive Rabie.

Based on its understanding of the Australian SME market, Reckon recommends:
the Federal Government implement:
– Simplicity of regulations and compliance;
– Increased incentives such as via lower tax rates;
· Equitable tax burden;
– Ensuring local businesses are not unfairly disadvantaged against foreign competitors in Australia. Local companies normally face more stringent laws and regulations around consumer law, labeling and health standards, often resulting in higher costs to a local small business.

Responses came from over 2400 small business operators this month.