We reported on Nulab’s move to de-commission its fleet of Fuji Frontiers and replace them with two Indigo printers back in 2014, but it seems the changeover wasn’t as straightforward as assumed at the time.

Nulab discovered the original Indigo 7600 technology wasn’t up to the job of professional photo printing, leading to disappointed customers and 20-month’s hard slog working with HP physicists, colour scientists and workflow specialists both in Australia and Indigo headquarters in Israel. During that time frustrations led to staff departures and quality issues to client departures but now, according to executive director, Michael Warshall, Nulab has nailed it.

One of the critical issues was paper stock. Nulab opted for a new standard substrate, a 260 gsm Felix Schoeller lustre photo paper, which it claims ‘definitely has a more luxurious feel to traditional silver halide paper.’

‘We are the first professional photo lab in the world to make a total transition from traditional silver halide printing to the new and exciting Indigo digital printing technology,’ said Michael Warshall.

‘We worked for quite a while and did not project the amount of obstacles we faced,’ he told printing industry website, ProPrint.

‘The technology failed at first, and we had to push the machines to the limit to invent something that did not exist.’

What exactly is Enviropix and why is it environmentally friendly?
Enviropix is the name we gave to our HP range of photo quality products. Generally printed on Felix Schoeller E-photo paper. We have been audited by the printing industry and have received a Level 2 Green Sustainable Certification. There are no chemicals with this process as opposed to AgX where chemicals were toxic and eventually went to drains. Everything is recycled.

You said that the Indigo technology failed at first – how so?
When we originally changed to Indigo all was good. This is because all tests were done on well exposed files with a good dynamic range. When we launched to the photo industry we began to get complaints from a large number of clients. It took some time to work out why certain clients were complaining. We found their files were not properly exposed, with a short dynamic range and a steep exposure curve. The Indigo could not lay the ink properly and we got fragmentation and artifacting of the prints.

After meeting with their physicist he understood what the problem was and I believe they changed the way the ink is laid on such files. There were also issues with the black and white prints – they suffered from metamerism. To get good black and whites we had to print using black and light black ink only. I pointed out that there were some issues in clogging up of mid tones and eventually they mixed special light black ink.

Was there any difficulty in using the thicker stock with the Indigos?
Our Indigos were configured to handle thick stock.

You started out in 2014 with Indigo 7600s – weren’t they adequate?
No, the 7600 were not able to produce the goods. They had a densitometer and the press must have a spectrophotometer. In our world, the colour must be consistent throughout.

What is the colour of your seventh ink?
We print CMYK, light magenta, light cyan and special light black

Will this 7-colour system be rolled out to other HP Indigo 7800s around the world printing photos?
As we were the guinea pigs and pushed HP to the limit, now that this seems to be solved I am sure they will roll this out to all the labs globally who will need to convert from old AgX to new Indigo technology.

Tell us about the black and white inks – why are these superior?
Yes the special light black allows us to produce photographic quality prints with exceptional areas of solid black.

A couple of years ago you said that compared to silver halide printing, the Indigo colour gamut is ‘a little shorter on the blue side’ but the difference isn’t discernible when silver halide and Indigo prints are compared side by side, even by experts. Is that still the case or does Indigo printing now match AgX on colour gamut? How about inkjet?
As both colour spaces are typically sRGB, the colour we get is vibrant and well saturated. So far everyone who has seen it has been overwhelmed with the quality.

How do your costs of production stack up against a traditional AgX-based Prolab? Costs are similar , but the equipment is much more efficient. Our Indigo 7800 produces the equivalent of 10 digital minilab printers.

Has you customer base changed with the migration away from silver halide technology? Have you taken all your customers with you on the journey? 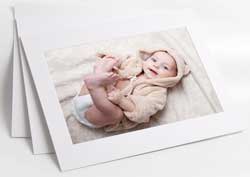 Over the last 20 months we actually lost a lot of business as the Indigos were not able to match silver halide. We already turned off all our devices so we suffered terribly. Now we definitely have a superior product so we will be working on getting the lost business and at the same time looking for new business in our niche space of professional photo space.