Panasonic has announced May availability at $1099 (body only) Lumix DMC-GX85, featuring 5-axis image stabilisation, an advanced sensor and 4K video.

The GX85 has a smaller and lighter body than the GX8, but similar styling. It will available in all-black and silver and black, with a textured look to the body. The front and rear dial system is crafted in high-quality aluminium while the solid grip is stable and comfortable to hold.

‘Focus Bracketing’ adjusts the focus point while maintaining depth of field, a useful tool for macro shots. Panasonic’s 4K feature suite includes 4K Live Cropping for stable panning and zooming during recording. 4K Photo modes include 4K Pre-burst mode which records 30 frames per second before and after the shutter is released, and Post Focus, which allows the user to choose the focal point of an image after the shot has been taken.

The tilting EVF has a resolution of 2.77 million dots and supports 0.7x magnification (35mm camera equivalent). An Eye Sensor switches automatically between the EVF and the 3-inch 1.04 million-dot, tilting LCD monitor. 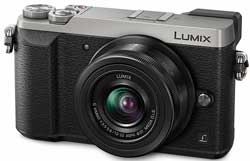 Other features include:
– Creative Control with 22 filter options that can be applied in P/A/S/M mode;
– ‘L Monochrome’ profile with rich gradation reminiscent of classic black and white film;
– Wi-Fi connectivity using the Panasonic Image App;
– New optional External Flash DMW-FL200L (GN20) which can also be used as an LED light in video recording and features wireless shooting.