Fujfilm X-A10 most selfie-centered so far 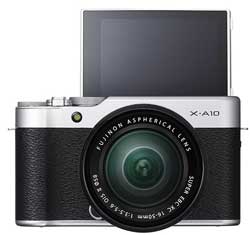 The X-A10 combines a new 16 megapixel sensor with an 180-degree slide-and-tilt LCD with 100 percent visibility for those all-important selfies. (No viewfinder, though.) Even the grip is shaped to accommodate both normal and selfie shooting. And when taking a self-portrait, to focus and release the shutter there’s a vertical command dial found directly below the index finger to minimise camera shake. Rotating the tilting LCD upward by 180 degrees activates the Eye Detection AF to automatically adjust the focus on the subject’s eyes. The X-A10 also features a Portrait Enhancer mode for flattering skin-tone reproduction.

But wait! There’s even more selfie-enhancement features on board: the Self Timer offers Smile Detection, that take photos automatically when the subject smiles; Buddy Timer which shoots when two people come close together; and Group Timer mode that automatically shoots when a specified number of people come into the frame.

The use of two Command Dials allows the user to use only a thumb to quickly adjust aperture, shutter speed and exposure settings. Frequently used functions such as white balance, continuous shooting and the self-timer can be assigned to standalone function buttons, eliminating the need to go through the Menu screens to change settings.

Fujifilm claims the X-A10 is capable of shooting around 400 frames on a single battery charge. The camera also supports charging via USB.  When fitted with the standard zoom kit lens (XC16-50mmF3.5-5.6 OIS II), the camera offers a minimum focusing distance of 7cm from the front of the lens, allowing close-up macro photography. 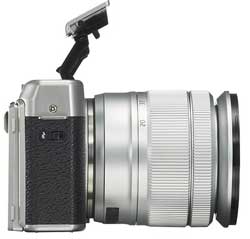 The built-in pop-up flash controls light output according to individual scenes. When shooting indoor portraits in low-light, small items or food, the flash system reduces highlight clipping. Natural colours and brightness are also achieved when shooting backlit scenes, or photographing a person under intense sunlight that casts strong shadows on the face. (Now with fill flash!)

Video recording is at Full HD. Other features are Panorama and Time Lapse functions, the interlocking of exposure metering and AF areas, and support for the expanded Adobe RGB colour space (important for superior inkjet prints). Wireless communication functionality enables remote shooting from smartphones and tablet devices. A free Camera Remote app enables transfer of photos and videos with a simple one-touch operation.

The Remote Shoot function lets you focus, adjust exposure and a range of other settings, and take photos from your smartphone or tablet device. Images can also be sent directly from the camera to an Instax Share smartphone printer for instant printing.