Kudos Cameras hangs out the shingle

After three decades in the photo industry working for the likes of Foto Riesel, DigiDirect, CR Kennedy, L&P and Georges Cameras, Sydney-based Peter Giannakis has started his own business under the name of Kudos Cameras. 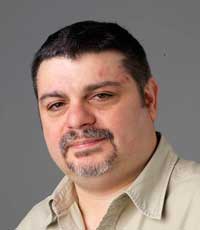 It’s something of a hybrid wholesale/pro reseller operation, and as such not the first operation to use this model in the local industry.

His offering direct to photographers is German-based PRIOlite Studio Flash equipment. A relatively new company, PRIOlite flash gear is built around lithium ion battery power, making it independent of mains power supply and massively expanding possible applications (literally!) ‘in the field’. PRIOlite also uses LEDs extensively as the light source, both for flash and continuous lighting applications. The equipment is designed and manufactured in Germany.

‘For products like these I would prefer to establish a good relationship with photo dealers by not undercutting them, offering training and quick service support with any issue related to the product, and pass on leads to stockists,’ explained Peter.

‘If you look around the photo industry in Australia – the photo stores that survive are the ones that import products themselves, and created a point of difference between themselves and the mass merchants,’ he said.

He noted that many of the local photographic suppliers also have a direct outlet ‘and their representatives sell direct to photographers and government and education departments.’

The careful reader will note that the one category of product Kudos Cameras doesn’t stock is – cameras! Why?

‘There are plenty of camera retailers, and why compete against my customers? If a retail customer would like to purchase a camera or lenses from Kudos, it has an affiliation with a camera store who will quote and supply.

‘Maybe in the future, but for now I will concentrate on supporting the handful of products that I import.’

Kudos Camera will soon be moving to new, larger premises in Ultimo.