Fujifilm has announced two new cameras and several lenses in the US for February release. 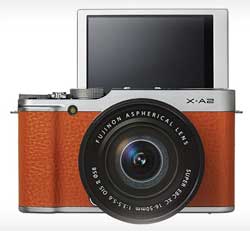 The Fujifilm X-A2 is a lightweight, ‘selfie-ready’ mirrorless interchangeable with a 3-inch, 175-degree tilting LCD screen on the back that can be pointed forwards for maximum narcissism.

More generally, it features face and eye detection to assist with people pics.

The X-A2 will be available in the US starting in February 2015 with a minimum advertised price of US$550 bundled with the 16-50mm lens (see below). 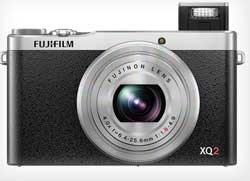 Fujifilm’s new premium compact camera is the XQ2, which overseas websites are describing as the XQ1 with a firmware update.

US minimum advertised price is US$400.

Two new kit lenses were announced along with the X-A2, while a more impressive 16-55mm F2.8 lens was announced separately. 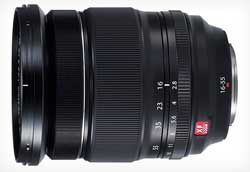 The XF 16-55mm F2.8 R LM WR is the equivalent of 24-84mm in 35mm terms, and features a constant f2.8 aperture across its zoom range. Autofocus speed is just 0.06 seconds, and the focusing system has quiet autofocus that silently takes its place alongside Fuji’s ‘silent shutter’ firmware updates.

It has a weather-resistant and dust proof exterior for reliable performance in the field. There are 14 seals to help keep the innards nice and dry. The front lens element has a Nano-GI coating that reduces ghosting and lens flare…9 blade aperture for attractive bokeh. Minimum focusing distance is around 30cm.