Music retailers show us how

Saturday, April 18 is international Record Store Day – an initiative developed eight years ago by independent music specialist retailers in the US to promote ‘the world of the record store’.

‘This is a day for the people who make up the world of the record store—the staff, the customers, and the artists—to come together and celebrate the unique culture of a record store and the special role these independently-owned stores play in their communities,’ explain the Record Store Day organisers.

Today (well tomorrow, actually) there are Record Store Day-participating stores on every continent except Antarctica. In Australia, well over 100 independent music stores are taking take part. Special vinyl and CD releases and various promotional products are made exclusively for the day and dozens of musicians across the country make special appearances and performances – for instance Paul Kelly is performing at Melbourne’s Greville Records. 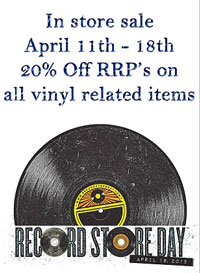 ‘So what’s that got to do with us,’ a reader of Photo Counter might ask?

Record Store Day also provides the photographic industry with a proven template to promote the values and benefits photo specialist retailers also deliver to their communities. Music stores and photo stores are more the same than different: The technological and structural challenges faced by independent music stores over the past 10 years parallel those which have confronted photo retailing: online downloads of digital music files from iTunes, etc, removed a fundamental reason to visit the local record store, just as digital screens have given consumers access to their pictures without the need for a hard copy product; big retail chains – notably JB HiFi, moved in and discounted prices for CDs 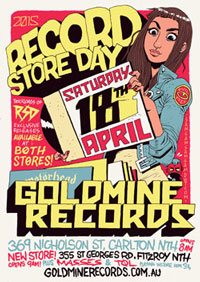 just as Big W and Harvey Norman did with 10 cent photographic prints; Amazon also moved in and undermined the prevailing CD price structure, and provided a grey market (GST-free) online alternative – even for true enthusiast-oriented stores which were willing to keep an extensive specialist inventory.

JB Hi-Fi and grey marketers such as B&H, Adorama, Digital Rev and the eBay crowd likewise have undercut local photo specialists in the hardware segment.

And just as the generationist pundits have been predicting that the photographic print will be dead well before the last Baby Boomer is buried, so to has the epitaph of recorded media such as the CD been written many times.

The record stores’ trade association – with support from their suppliers – has brought them together to highlight the continuing value of their retail specialty. We have not been so lucky with our industry associations. Perhaps it’s time to make our own luck!

Record Store Day is administered by the Australian Music Retailing Association and supported by leading record labels and audio equipment companies. Joe Camilieri and country star Amber Lawrence are this year’s ambassadors for the day and have been making themselves available for interview. (Camilleri scored a long interview promoting record stores on ABC Radio National on Thursday morning, in which he emphasised the value of expert staff). Record Store Day in Australia has a dedicated website and Facebook, Twitter and Instagram pages. The website provides retailers with downloadable logos, web banners, posters, a template press release to adapt for local media, and a brilliant 6-page list of promotional suggestions for individual stores. The wheel has been invented – all we need to do is adapt it to spin on our own axle!.

The concept is eminently transferable to a photo store environment for a ‘Print your Photos Week’ or something similar. Instead of musicians, the photo industry could enlist the support of articulate and well-known photographers such as, say, Ken Duncan, or celebrities with a passion for photography. We have suppliers who should be willing to help. We have a network of stores around the country staffed with passionate photographic experts. We have customer databases. We have local camera clubs. We have enthusiast websites to amplify the message.

Many people would be amazed to see what can be produced in-store these days, from canvas prints to photo books to T-shirts. How many people actually know they can easily print photos from their smartphones?

We have an important social message to deliver – namely that photographs are more important than most of us realise. The days when we could rely on a Kodak or Fujifilm to put it out there are, apparently, gone. Perhaps they could chip in with some sponsorship money for a store-driven campaign…

So, what do you reckon?
– Keith Shipton