Fujifilm is expanding its stable of Wonder Photo Shops, with recent openings in Manila and Shanghai, following the original outlet which opened in Tokyo early last year.

Fujifim Australia has indicated that it will be making announcements regarding local ‘Wonder’ initiatives in the fourth quarter of this year.

The Wonder Photo Shops, which Fujifilm Australia referred to recently in an exclusive contribution to PhotoCounter, are part store, part learning centre and part workshop, and are focused on exciting younger people about the benefits and attractions of hard copy images in the era of the smartphone.

‘We thought if we make the printing process more enjoyable, people will print more. We created an interesting printing shop so many people can come here and enjoy,’ Fujifilm Philippines boss Takuya Maeda told the Philippines Daily Inquirer.

Among the attractions of the Wonder Photo Shops are:
A Pro Selfie Studio where people can take portraits of themselves and their friends with props and green screen background;
Wonder Photo Stations for printing photos direct from phone or memory card instantly using different templates. Alternatively, printing apps can be used;
A large range of albums and frames;
A large range of scrapbooking bibs and bobs including stickers and ‘washi tape’ (masking tape). There are tables with supplies for working on scrapbook and albums projects in the store;
The latest Instax products such as the candy-coloured Instax Mini 8, the Mini 90, a limited edition Hello Kitty camera, the Instax Share smartphone printer; Instax film with licensed branding such as Monsters Inc; and even colourful Instax-branded USB flash drives;
In-store photo book creation.

According to Photo Imaging News International, Fujifilm will use the stores to conduct market research on issues such as the popularity of prints from smartphones among younger people. 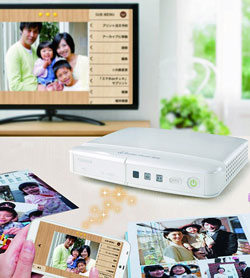 The Wonder Photo Box is a digital image storage device featuring 1TB memory capacity which aims to facilitate the organisation and accessible storage of images – one of the big hurdles separating consumers from their photo collections. Wonder Photo Box (launched in some parts the world last year) imports photos via Wi-Fi, USB2.0 and SD card. Images are then automatically stored in both internal and cloud storage. Each photo is analysed and organised by several criteria including date taken, landscape, food, pets or facial recognition. It even takes a stab at rating the quality of photos. Photos can be displayed on HDTV, smartphones and tablets. Photo books are automatically compiled for order through an online printing service.

This beast a 23-inch wide touchscreen monitor that operates like the screen of a smartphone or tablet, and can import 1000 images in Exif-JPEG format in just 5 seconds.

Like the Wonder Box, the Wonder Photo Station gives photos a star rating for quality. Customers can design and order ‘Wonder Shuffle Prints’ (automatically generated collage prints) in addition to conventional prints. Prints from images stored on the Instagram or Facebook can also be ordered.

Click here for a virtual visit to the Tokyo Fujifilm Wonder Photo Shop with ‘RenShiba’.