Sensor of the future?
Hard on the heals of its curved sensor announcement, Sony has announced another sensor patent in which each pixel senses red, green and blue, by means of an electronic colour filter.

This is a more advanced solution than Sigma’s Foveon sensor, which uses three vertically-stacked R-G-B layers.

Because less pixels are required, pixels can be larger, and so less susceptible to noise. Video capabilities are extraordinary – Sony claims 4K shooting at 240fps.

The oracle at SonyAlpha Rumours predicts the new sensor will be first used in a Sony smartphone and then it will be seen in a Sony Alpha camera. 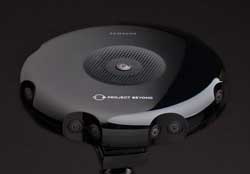 Samsung is also making waves in imaging technology innovation, announcing a camera capable of  capturing 3D video in a full 360-degrees, under the name ‘Project Beyond’.

The camera captures a gigapixel of 3D footage every second for more realistic (less virtual?) virtual reality images. The camera is designed to work with Samsung’s Gear VR headset.

Along the outside of the frisbee-like device there is an array of 16 Full-HD cameras and wide angle lenses in eight pairs.

Beneath the camera is the device’s processor and storage. Samsung says that it’s ‘the world’s first true 3D 360 degree camera’ and captures and streams ‘omniview’ videos in high-resolution 3D.

Nude selfies? Think Polaroid
In the wake of the iCloud ‘nude celebrity photo leak’ brouhaha, an article in The Guardian (UK) last week suggested there was a new reason for the popularity of old school instant photography – there is no digital file of one’s naked self to have ripped off.

One of the less celebrated celebrity ‘victims’, a sitcom actress called Kaley Cuoco, is reported to have said: ‘Polaroids are the way to go. No one can get those.’

She advised people not to take any nude image of themselves through their phone. ‘I’ve now taken to Polaroid cameras, so I just carry a big Polaroid around my neck, self-aroid, that’s what I do now,’ she said.

The Guardian article also quoted Creed O’Hanlon, CEO of The Impossible Project, which now manufactures Polaroid film: ‘In the past 10 months,’ he said, ‘we have seen a 75 percent increase in the 18-25 demographic, with teenagers turning their backs on digital for something more tangible. Over the past six months, we have doubled the volume of films we sell and refurbished more than 30,000 classic Polaroid cameras. Next year, we expect these numbers to double.’ 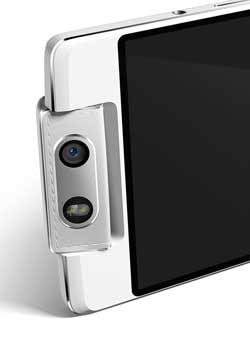 Just as camera innovation is no longer the province of the established players, smartphone innovation is also coming from unexpected quarters. Chinese firm Oppo with its latest release, the N3, claims the world’s first automated swivelling camera. (Obviously Oppo hasn’t heard of the Widelux.)

The N3’s 16-megapixel camera has the ability to rotate 206 degrees and can take panoramic shots without even panning. Oh, it also takes selfies, of course.

Furthermore, the camera showcases Oppo’s target-tracking focus shift function – all users need to do is to identify the target in focus and the camera will constantly modify its angle to follow the moving target in both photos and video mode.

It features an f2.2 Schneider Electric lens and can shoot 4K video at 30fps.

However there’s a hint of overreach when Oppo states in its press release ‘ The N3 delivers a user experience and quality of output equivalent to that of a professional DLSR camera.’ Really?

Oppo, um operates in Australia and the N3 will be released soon.